While many of us are hoping for the announcement of a fifth Devil May Cry, at the moment we'll have to make do with a remaster of the first three games. Yes, Devil May Cry HD Collection has just landed on PC, PS4, and Xbox One this week, bringing these original games into the spotlight once more, providing the perfect opportunity for newbies to get involved, or for existing fans to get reacquainted.

We've been playing as Dante for several hours, the complicated demon hunter who is (despite his profession) half-demon himself. The result? Well, the hero has lost none his charm and his haircut is still as classy as it gets. It's aged a bit no doubt, but it still feels good to get back in his shoes, and that's what matters.

We first returned to Mallet Island in the original game, the one that brought so much attention when it released on PlayStation 2 back in 2001. It was hard at that time to find a game with a similar technical level, but we didn't dwell too much on Devil May Cry 2, which for us is the least impressive of the three. It changed too much compared to the rest of the series, especially in terms of gameplay, but we're pleased it's still included in the overall package.

The best has been saved for last though, the icing on the cake that is Devil May Cry 3: Dante's Awakening. This pack also contains the Special Edition, which allows us to play as Virgil, Dante's brother, and here the action regains its nervousness in battles where we face huge waves of enemies. 3 is a homecoming with a beautiful aesthetic, something that made it a hit with fans.

A word of warning to newcomers - don't expect the gameplay in the most recent DmC: Devil May Cry. Here the gameplay is very basic. It's still all about frantic and chaotic hack 'n' slash action, with a Tomb Raider-esque exploration element. You may not know this, but the first title in the series was originally supposed to be a new Resident Evil before Capcom changed its mind due to the quality and direction the game took during development.

In this 2018 version, the resolution is changed to 1080p, and while this might sound wonderful, it's nothing extraordinary in reality. What really changes are the animations. Taking advantage of the power of the current gen consoles, Devil May Cry HD Collection increases the animation rate to 60 FPS, which is a greater deal than expected, especially when you know how the hero jumps, moves, and uses his swords in all directions.

This improvement was particularly felt on Devil May Cry 3: Dante's Awakening. The third entry in the trilogy (which was actually a prequel to the saga) seemed a little more dynamic, and the same goes for the cutscenes, which were clearly more explosive than in its predecessors. Some flaws are still present though; as you'd expect when bringing a PS2 game into 2018. Most notable are issues surrounding the in-game camera, which makes some fights frustrating, as is the case in the lack of reactivity from some of the enemies.

If you're a fan of Devil May Cry, you'll no doubt enjoy diving back into the gothic rock 'n' roll universe that has built up around this mythical series. If you've never played it before now you've lost the last of your excuses, as Devil May Cry HD Collection is available for a modest asking price. That said, we must still admit that we lamented the absence of the fourth episode of the series which stops it feeling definitive and means it's pretty much the same deal as the collection that landed in 2012 on PlayStation 3 and Xbox 360, except for the added power of the current gen consoles, naturally.

"Dante has lost none his charm and his haircut is still as classy as it gets."

"It shows that you can play old games without losing respect for them. Time has not affected the core experience, and in truth it shows how little gameplay has evolved."

Watch our video review of Devil May Cry HD Collection

We've been back for another bite at the demonic trilogy.

It's time to join Dante and revisit his first three adventures.

Capcom confirms it's identical to the 2012 collection.

Unlike the console versions.

No 4K graphics in Devil May Cry HD Collection

Dante held back from looking his best.

Devil May Cry HD Collection coming to PC, PS4, and Xbox One

It's almost as if Capcom is teasing something... 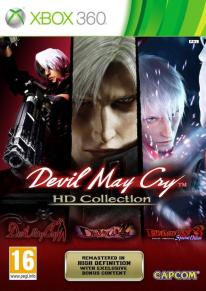