REVIEW. Written by Sergio Figueroa on the 9th of November 2020 at 15

Capcom's first step into next-gen may or may not be what people expect from them.

"Regardless of whether you're are a long-time fan or new to the series, this game is absolutely worth picking up."

Players will be treated to some fantastic hack and slash action on day one of the new console.

If you've been putting this one off until later, your time is running out.

Brian Hanford voices V in the game, and seems to indicate that Dante will be headed to Nintendo's fighting title.

Devil May Cry 5, Blair Witch, and Stellaris are all hitting the subscription service over the next few weeks.

Devil May Cry 5 has sold 2.1 million units so far

Capcom's new sales update has also revealed that Resident Evil 2 has shifted 4.2 million units, with both games releasing this year.

Development on Devil May Cry 5 has finished

After rumours popped up about a Ladies Night DLC, Capcom producer Matt Walker broke the news that development is over.

Devil May Cry 5 censorship has been removed in the US

American players can now enjoy the bare behind of Trish without a lens flare blocking the view, as was previously the case.

The extra challenge is landing as a free content update, giving players two minutes to complete each room and get the best score.

A panel at the Game Developer Conference revealed the good news for Dante, Nero, and V, who have passed the milestone in mere weeks.

Devil May Cry 5 getting free Bloody Palace mode in April

Test your skills as either Dante, Nero, or V as you take on increasingly difficult enemies and bosses against a timer.

A Beginner's Guide To Devil May Cry 5

We're all beginners at some point and after familiarising ourselves with Devil May Cry 5 we've written a guide for those who are just getting started with Capcom's latest actioner.

There is one scene that has been altered slightly on Sony's console, and a comparison shows the alteration.

How to get Devil May Cry 5's Double Kalina Ann RPG 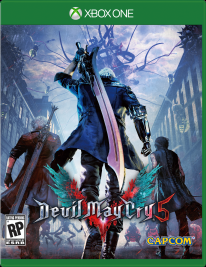