This week Sega is marking a rather momentous anniversary and, as part of the company's 60th birthday celebrations, there's a big sale currently over on Steam filled with discounts and demos.

One of the games to feature in the promotional event is a demo of a prototype that Sega is, with a tongue firmly in cheek, calling Golden Axed. Here's how it's described on Steam:

Golden Axed offers a unique glimpse into the prospect of a project that could have been, and a rare peek behind the curtain at the sometimes tumultuous world of video game development.

As detailed in the Steam listing, Sega Studios Australia was working on reboots of multiple classic franchises, including "2.5D reboots of Golden Axe, Altered Beast, and Streets of Rage, as well as an endless runner version of Shinobi, all encompassed in a universal hub world."

Of course, as you'll have noticed, these games never saw the light of day, and the reason given is that Sega Studios Australia shut down in 2013 along with its projects.

However, following the reveal of the demo, one of the devs who worked on the prototype has spoken out, sharing his disappointment not only that the project has resurfaced, but at the light-hearted way that it has been presented.

"Woke up to the surprising news that Sega is releasing the Golden Axe prototype I coded in 2012 under crunch conditions. At least I'm not alone - this appears to be a surprise to everyone I know who actually worked on it," developer Tim Dawson wrote on Twitter earlier this morning.

"This project was my personal nexus of nightmare hours, inept management, industry realisations and heroics achieved with a small team under unreasonable conditions, so it's an odd feeling to see it surface eight years later without context, credits and with a joke title sequence."

Apparently, Dawson and his colleagues were asked to make a "darker, bloodier Golden Axe, with splatter and decapitations and two button combat", and you can see how it came out in the screens below.

In the rest of the thread, Dawson explains how the project came to be, and the stress he was under to deliver a working prototype in just a couple of weeks. After getting negative feedback during the iteration process, apparently, the final build was well-received by management.

"The finished build was revealed, and the same management team that negged me earlier lined up to tell me how good it was now."

"I felt dead inside," Dawson continued. "Not just because of a couple of long 7 day work weeks and start of the RSI in my right arm that would go on to jeopardise development of @AndroidCactus , but because I had no trust left in the people who ran things."

Dawson then ended the thread with a line from the store listing:

Golden Axed may be janky, may be buggy, may be an artifact of its time, but it offers a unique glimpse into the prospect of a project that could have been.

"Go fuck yourself, parasites," he wrote in closing.

The demo is set to land on Steam on October 18, and according to the listing, it'll be available to play until 6pm BST, October 19.

The one-level demo was released on Steam as part of Sega's 60th-anniversary celebrations. 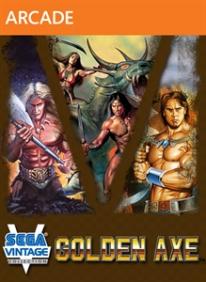