Destruction AllStars developer Lucid Games recently released a blog post that has shown off the roadmap for the title over the course of 2021. The multiplayer game known for its arcade racing action will be heading into a seasonal format as soon as April, and will be bringing new modes, new AllStars, and even a battle pass for players to chew through.

The first season, known as Hot Shots will be starting in April, and lasting until July, and will see the introduction of a competitive mode that pits four teams of three players up against one another. The new season will also bring a battle pass to earn exclusive new content across free and premium tracks. There will also be a photo mode coming for you to snap some crazy crashes in all of their glory, although as the blog post alludes to, this might only be for singleplayer modes. Finally, Hot Shots is also adding a new AllStar, although as Lucid Games has stated, "We want to wait just a little bit longer to give them a proper introduction and give you a full preview of their Hero Vehicle and abilities."

As Destruction AllStars previously launched as part of PlayStation Plus, Lucid Games has noted that the game will be getting two editions when it is available to buy on April 6. While we already knew about the standard edition, the digital deluxe edition will contain:


If you haven't already, be sure to check out our review of Destruction AllStars right here.

REVIEW. Written by Sergio Figueroa on the 5th of February 2021 at 12

Destruction AllStars is getting online bots

Lucid Games: "We want to ensure that matches are filled to capacity with as many real players as possible".

It will bring new modes, new AllStar, and a battle pass.

Destruction Allstars is PlayStation's first State of Play in 2021

Learn everything you need to know about one of February's free PlayStation Plus games in this seven minute long gameplay video.

Next month's PlayStation Plus game sure seems...unique.

Destruction AllStars has been pushed back to February 2021

The title will now, however, be free with PS Plus for two months starting February 2021. 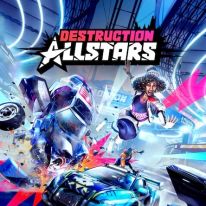