It's been a while since a Desperados game hit our virtual shelves. For those not in the know, it's a top-down tactics series with a western twist that follows a group of characters as they tear it up in the Wild West. In fact, I was actually really excited about playing this one as I loved the originals. I was also delighted to get my hands on the PS4 version of the game, although looking back now I think that this may have not been the best idea - but I'll get to that later!

Desperados III acts as a prequel to past events and shows how a motley crew of five rogues gets together so they can stick it to the man. To that end, you find yourselves taking on bad guy after bad guy in situations such as a train during a hold-up, a wedding that has gone horribly wrong, and a trip to a town where the railroad is pulling down houses without consent.

The main characters are John Cooper, a guy who's handy with his knife and two revolvers; the charming Kate, who can distract enemies; Hector, who has a bear trap; the mysterious Isabelle; and then there's Doc McCoy, the sharpshooter. All of the characters have their own unique skills to get the job done, and you'll use different combinations at different times. John's throwing knife can be used to take out an enemy quickly and quietly, while Doc McCoy can use his medicine bag to gas an enemy before breaking their neck. Hector, meanwhile, has a whistle that can pull his enemies into a bear trap.

You need to combine their skills and have them work together if you're going to get to the end of the often quite lengthy missions, and I loved the level of strategic planning that goes into each one. Plotting routes and knowing there's more than one way to skin a cat, so to speak, is a defining quality here. The best parts of the experience are the use of cooperation to get the job done and the feeling of choice in terms of how you dispose of your target. Knowing you had to plot and plan, thinking about where to stash the bodies so they were out of sight, dodging flames to stay hidden, blending in with the townsfolk - the range of options on offer made Desperados III a tactical tour de force.

Likewise, the different enemies, such as those that couldn't be easily distracted by Cooper's coin toss or Hector's whistle, made for a varied experience. Similarly, the variety of ways you can dispose of someone, be it an environmental kill using oil and fire, or throwing a coin on a horse's arse to make it kick a passerby, kept my imagination pumped!

There's also a slowdown mode for you to orchestrate the movements and actions of two characters at the same time. This was really cool, and when it worked, it paid off brilliantly with some really satisfying moments. What's more, you constantly have new ways to kill or take out enemies, and some of them were truly entertaining. On the other hand, you also have to constantly be aware of the sightlines of your enemies; sometimes crouching or hiding in tall grass, toilets or buildings was enough for you to slip in and out without being seen. There's a lot going on, but when a plan comes together, even Hannibal would be proud!

The banter between the characters was also pretty awesome, with witty and engaging dialogue that made you feel like this was a group of true compadres. The story likewise was well told with engaging villains and a bunch of characters that can you really love to hate, and it's all held together with cutscenes delivered from the same isometric viewpoint as the game is played.

Finally, our last bit of praise before the storm. I loved that missions were graded, giving you a star-rating at the end, letting you know how you did in the grand scheme of things. This added a lot of replay value as it pushed me to do better, much in the same way as I enjoyed trying to hit every target and get a perfect kill in Hitman.

And so, the graphics, audio, gameplay, characterisation, and tactics were all spot on, yet the experience was hampered by one thing: the controls. If, like us, you end up playing on console, you move with the left stick and adjust the camera with the right, except it took me an age to get used to this set-up, and even after hours of playing it still felt clunky. I constantly walked off the screen, suddenly panicking when I had to move the right stick to catch up. When playing on manual, I'd often lose my character and quite frequently die. There was a lock-on feature, with the right stick just for zooming and rotating, but it still felt awkward. The controls just didn't feel natural, even by console standards (and, for the record, I've played a lot of strategy games on console). That, combined with a minimap that I found tough to read, meant that sometimes I was dying for no good reason.

All in all, Desperados III is a great experience; it's fun, tactical, and interesting, with a variety of creative ways for you to dispatch your opponents. The variety of enemies, such as the long coats that only Hector can kill in direct combat, or the villains in red who aren't as easily distracted, keeps things feeling fresh throughout. There was so much to love. However, the controls just aren't good enough on console (GR Denmark reviewed the same game on PC and gave it a 9/10, so go ahead and add a point if you're playing with a mouse and keyboard). Others may feel more at home than I did, but for me, a brilliant and almost perfect tactical experience didn't quite hit the mark.

Advertisements
Gamereactor UK
+
Looks and sounds great, excellent tactical combat, fun and engaging story, great character building.
-
I didn't like playing it on a controller at all and that really soured an otherwise excellent experience.
is our network score. What's yours? The network score is the average of every country's score

"Desperados III is a great experience; it's fun, tactical, and interesting, with a variety of creative ways for you to dispatch your opponents."

Take a look at the Desperados III launch trailer

Do you appreciate a nice tabletop miniature diorama? Are you also looking forward to Mimimi Productions' Desperados III? Then you should check out its latest trailer.

The story is set before the other games, and the tutorial is a key focus, as revealed by narrative director Dennis Huszak at Gamescom.

We got an in-depth look at Desperados III

We caught up with Mimimi Productions for a look at what the new game offers. 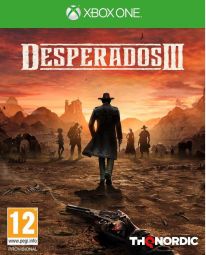