At the Gamescom opening ceremony, THQ Nordic unveiled a brand new trailer that turned out to be the unveiling of Desperados III, meaning John Cooper and his band are back in the American West with a tactical game developed by the German studio Mimimi Productions that smells of gunpowder.

Desperados III will let you use up to five trigger-men as you have the option of several different approaches to each mission, and what's more is that we can expect the game on PC, PS4, and Xbox One next year.

Do you like games set in the American West?

"Desperados III is a great experience; it's fun, tactical, and interesting, with a variety of creative ways for you to dispatch your opponents."

Take a look at the Desperados III launch trailer

Do you appreciate a nice tabletop miniature diorama? Are you also looking forward to Mimimi Productions' Desperados III? Then you should check out its latest trailer.

The story is set before the other games, and the tutorial is a key focus, as revealed by narrative director Dennis Huszak at Gamescom.

We got an in-depth look at Desperados III

We caught up with Mimimi Productions for a look at what the new game offers. 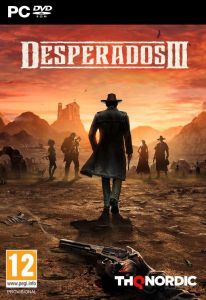