Descenders, a downhill action cycling game from RageSquid, has now been optimised for Xbox Series. This shiny new edition of the game includes a 1080p/120fps performance mode and a 4k/60fps resolution mode for players to chose between. It also includes additional features such as PC cross-play and eight-player lobbies.

Along with the Xbox Series version, the game has also received a physical edition (you can take a look at the box art for it below).

"We're thrilled to be releasing a physical Xbox edition of Descenders simultaneously with the game's Xbox Series X|S update this June," said Katie Clark, Senior Product Manager at Sold Out. "Whether it's new players or existing fans looking to pick up a physical copy for their collection, we can't wait for Xbox players to lead their team to glory with this physical Xbox release."

"The movement mechanics and overall feel of the controls certainly carry the concept, and the fantastic soundtrack only elevates it."

Descenders has now been optimised for Xbox Series

A physical edition has also released on Xbox.

Descenders to stay on Xbox Game Pass for a long time

RageSquid's Descenders won't leave the Xbox Game Pass lineup for quite some time according to publisher No More Robots.

Descenders to land on PS4 and Switch, retail release confirmed

RageSquid's downhill mountain bike game is hitting retailers this spring, alongside the digital releases on PlayStation and Switch.

Descenders is revealed via an energetic trailer 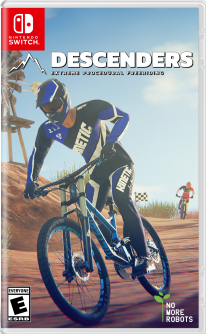