If you're a pinball fan, you've never had too much choice when it comes to video games. Zen Studios does a good job of bringing various IPs to the table, and recently we've had some pinball-themed adventures in the form of Yoku's Island Express and Creature in the Well, but generally speaking there isn't an over-abundance of pinball titles out there. That being the case, when we clocked Demon's Tilt on Xbox Game Pass we had it downloaded as quickly as our meagre Internet connection would allow, and we're glad we did because this pixelated table offers some seriously fun arcade-inspired action.

The main disappointment that we've had with Demon's Tilt is that there's only one table, and after a while, we would have liked a change of scenery, however, the table that we're given is deep and detailed and full of action, and once the lack of variety has been processed and forgiven, it's simply a case of chasing those high scores and improving your game.

The potential for crazy-high numbers comes from the multiplier system, which can see the best players bust out of the millions and into the billions. We don't mind admitting that in the limited time we've spent with the game, we didn't get anywhere near the best scores out there on the global leaderboards, but sure enough, we did see our personal best creep up and up the more we played, our persistence rewarded by rising numbers.

The table itself is split up into three clearly-defined dungeon-inspired areas, and these sections house their own bosses, which you have to battle by - yup, you guessed it - smashing them in the face with a pinball. There are a ton of little details hidden away in the table, waiting to be discovered, and there's a dash of shmup style too with artistic bullet-hell patterns filling up the screen when things heat up. It's deeper than your average table, and that certainly makes up for the fact that there's only one of them.

In terms of the pixelart visuals, playing Demon's Tilt is a mesmerising experience, and it doesn't take long for you to fall into a trance as you flip the ball this way and that, taking aim at powerups and bosses as you try and increase your score and avoid danger. The attention to detail is fantastic, but the screen can get really busy at times and when that happens it can be hard to keep track of where the ball is. We spent most of our time playing on a monitor and, frankly, we preferred seeing things up close over the big screen version on Xbox One.

Finally, we want to draw attention to the retro-inspired soundtrack, which evokes the 16-bit era with its pulsating beats and chirpy tones. It's toe-tapping stuff and chiptune fans will likely enjoy it. Indeed, Demon's Tilt is clearly a passion project for its creators and you can definitely feel the love that has been poured into all aspects of its design.

Another table or two wouldn't have gone amiss, and sometimes it gets just a touch too busy and difficult to keep track of everything, but otherwise, this is a fun little twist on the genre and if you're a pinball-loving gamer with a Game Pass subscription, it's a no-brainer.

Gamereactor UK
+
A detailed and interesting table with lovely pixelart and a great soundtrack.
-
There's only one table, it can be hard to keep track of things.
is our network score. What's yours? The network score is the average of every country's score

"This is a fun little twist on the genre and if you're a pinball-loving gamer with a Game Pass subscription, it's a no-brainer." 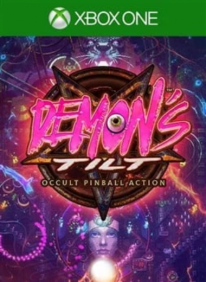