Demon's Souls is innovative, open, varied and incredibly modern. At the same time it's reactionary, controlled, repetitive and very, very old school. It might seem like an impossible mix, but the truth is that it's a very deep gaming experience.

After a fairly irrelevant background story you're dumped in a ruin. There you learn the basics - it's an action roleplaying game in third person, you control your small knight (or whatever kind of character you choose to create), this is how you swing your sword, this is how you cast magic, this is how you use healing herbs. The controls feel stiff, the camera is a bit of a pain. Pretty standard stuff. Then you enter a new room and a huge demon rushes towards you. And well, you die.

That's when Demon's Souls starts. You end up in the Nexus, a relatively safe and mysterious place where a bunch of disturbed individuals make their homes. It's a sort of borderland between life and death, and here you can shop, improve your weapons and skills. From here portals lead to five different worlds that have to be conquered, in whatever order you see fit and as many times as you want. And it will end up being many times. The fact that you're a spirit is just a minor setback, you might have less energy but you hit harder. Being dead is normal in this game, the times you are actually alive are easy to count.

It should be said straight away: if dying and having to do things all over again frustrates you in games, Demon's Souls is not for you. Before you learn how the enemies move and their underhanded tactics you will die over and over again. The game can be outright sadistic at times, with deathtraps all over the place. I learned how to deal with the spear traps in level 4-1 by slowly walking forward with my shield raised. The next trap shot the spear from behind. At times you make your way through darkness only to end up on a tiny ledge above a deep abyss and poof, 30 minutes of game time wasted.

But it's not as hopeless as old 8-bit games. If you're not incredibly clumsy you will become stronger. Souls are the currency, and every enemy you defeat will reward you a bunch of them. These you can use to improve skills and weapons. If you die, you lose your souls, but you can always fight your back to your body and reclaim them. If you die while trying, they are lost. It creates a fair but challenging situation, and it's hard to keep your pulse from racing when you're carrying 15000 souls with you. Then you're probably better off returning to the Nexus to spend them on a nice new sword.

With five worlds and thirteen levels, one could think that Demon's Soul is a fast affair. On the contrary. Every world is huge, filled with secrets and alternative routes and things you just can't pull off the first time around. Since you'll visit each world many times over, you'll memorize every nook and cranny and where every single enemy is located. While this makes playing easier, you can never ever relax. Messing up a parry or a clumsy strike with the sword can mean instant death. The fact is that you can't even pause the game, and pulling up the menus to change armor is something you should do in a safe place, if you can manage to find one that is.

It's this unforgiving, but still fair, game experience that makes Demon's Soul unique in a world where checkpoints every five meters and regenerating health are standard. It reminds me of the old days, where you fought your way to that last energy orb in Castlevania or Mega Man. In fact, Demon's Soul have a lot in common with The Adventure of Link: Zelda II. Especially the fights against stubborn and terribly strong enemies in knightly armor feel like a modernized version of Link's adventure.

But it's also innovative in many ways. It refuses to hold your hand in any way. When you create your character you get to choose from different classes - like soldier, barbarian, wizard, knight, etc - but this only decides which skills and weapons you start with. After that you can build your character in whatever way you like. You might find an optimal mix, or screw everything up. You might even kill the helping characters in Nexus, which will make things tricky in the future.

Another brilliant feature is the online support. Unless you pull the plug, the game is always connected. It's still mostly a singleplayer game, but when you explore the world you'll sometimes see the shimmering outlines of players that are in the same place as you. The effect is quite eerie, but it can also give you valuable hints - like when you see a player run past you and then start fighting around the corner. Bloodstains show where other players have died, and finally you can leave helpful messages like "watch out for this trap" or "from here you can shoot an enemy". If your tip helps another player you will be rewarded with replenished energy.

But there are other ways to get involved with other players. As a spirit you can visit players that happen to be alive, and help them out. If you defeat a boss together you get your life back, which makes it easier when you are on your own again. A more nasty way is to invade another player's world and try to kill him. As an evil spirit you don't have the fight any monsters and can attack when he or she least expects it. Or you can simply use your immunity to monster attacks and help out. Freedom, in other words. Being invaded by another player can be incredibly exciting.

The presence is incredible in Demon's Souls. Not knowing what is behind the next corner (and how it plans to kill me) creates a constant feeling of danger and the further I get into unknown territory the more nervous I become. Every step forward is a victory and when I find a new weapon that I can use to beat the living daylights out of the monsters that previously haunted me the sense of triumph is total. Then I notice that my cool spear doesn't work very well in tighter passages and have to adapt my tactics with new weapons.

The biggest flaw is the early hours of the game. The first time you visit level 1-1 you're handicapped, trapped in spirit form, without the possibility to call for help or even improve your skills. It takes a ton of trial and error and some luck before you even reach the first boss, Phalanx, who in himself is a big challenge. When you've gotten that far the game opens up and all options become available. But a lot of players have probably given up well before that happens. It took me five hours to get that far, and it was all thanks to other players that promised me all kind of great things that I had the strength to keep going.

Demon's Souls is partly unpolished, partly unbalanced and often frustrating. At the same time it's incredibly addictive and I never feel like I'm wasting my time with it. Demon's Souls can be played for hundreds of hours and it's a breath of nostalgic fresh air in an otherwise stagnating Japanese roleplaying genre.

Enter a dark, dystopic world where you've gambled away your life a long time ago. Demon's Souls is the roleplaying game more exciting and terrifying than most horror games.

Miyazaki played down expectations last month, but now a new post on ResetEra has gotten people talking once more.

The From Software president would be careful about the studio to remaster it though, and of course Sony would need to sign off on it.

From Software to shut down Demon's Souls' online servers

You have until February to dive in.

Won't close until early next year.

This is your worst nightmare 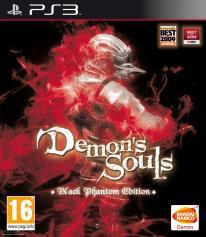