In 2009 (2010 in Europe) From Software delivered a game that birthed a whole new sub-genre now known as "Soulslike." That game was the notoriously difficult Demon's Souls, seeing players explore a dark, punishing fantasy world, fighting many challenging bosses in a, at the time, very unique RPG. Now, the masters of remasters and remakes themselves, Bluepoint Games, have rebuilt Demon's Souls entirely from scratch, breathing new life into this now more than a decade old classic. And let me start by saying this right away; it's amazing how big of a difference eleven years can make!

The biggest change in this remake is of course the graphics themselves. As this game is rebuilt entirely from scratch, Bluepoint have been able to make an incredible looking game, frankly, the best looking game on PS5 so far, in my opinion.

It offers so many nice looking and impressive details: Like blood splattering all over your armour when you slash enemies with your sword, shards of wood flying into the air when you break crates and barrels, visible dust and sparks catching air when activating old levers. The bosses have of course got the same loving care and look fantastic. Some even got some artistic changes, like Penetrator, who now have got this red smoke effect dancing elegantly around his sword making it look more powerful than ever. Spells look more spectacular, and when you cast them, they now create a shockwave that even affects things in the environment, not just enemies, adding more realism to the game.

It all looks incredible, sharp, with amazing details and colours. There is no ray tracing, but the lighting still looks great, and the reflections, like in water puddles or on shiny armour, are quite nice too. The new lighting effects really make a big difference. This all helps create a unique and fitting atmosphere, far better than in the original. You get to choose between two graphics modes when playing: a native 4K/30fps Cinematic Mode, and a 1440p upscaled to 4K/60fps Performance Mode. In games like this, where precision and timing is the key to success, a silky smooth framerate really comes in handy, so I would recommend prioritising that - and it still looks incredible regardless. Cinematic Mode is nice to have for those who would like to play around with the remake's new photo mode though, and you can change between Cinematic and Performance Mode anytime while in-game.

Also, let's not forget, the animations received some loving care too. Everything both looks and feels incredibly smooth, no choppiness or anything, which I experienced quite a bit in the original. I feel like I have full control over my character at all times and I never made the same stupid mistakes that I made so many times before due to lag or glitches. Even new attack animations have been added. It wasn't really necessary, but I am certainly not complaining!

The camera has been reworked as well, and feels much better than the original. It doesn't get stuck on certain parts as often now, but can still be a bit wonky in tight corridors. Now, when you backstab enemies, the camera zooms in a bit to get a better glimpse at that very satisfying moment too. I really like that.

If you are familiar with the original, you know that some enemies behave strangely, like running into obstacles and keeping on running without actually getting anywhere. Some enemies stupidly dodge into certain death, like when they just roll off a ledge for no reason at all. I would rather take the blow from my sword than just jump into death any day if I were them. This is all the same in the remake.

World Tendency is still a thing, so don't expect it to be removed here. Some may hate it, others love it. I personally love it, as it affects the world by the way you play. Like, if you die a lot in Human form, the game world punishes you by increasingly going towards Pure Black World Tendency, which makes the enemies even more challenging while also adding the extra tough Black Phantoms. If you get Pure White World Tendency, by for example beating bosses, besting invading players, killing the Black Phantoms when the World Tendency is already black, or just avoid dying in Human form (among other things that just aren't well explained at all, and still a mystery to me...), the world will be a bit friendlier towards you, making the enemies less challenging with less health and lower attack power (they also drop less souls, though). World Tendencies also alters the world around you, giving you access to places that you couldn't reach before if you get either Pure Black or Pure White World Tendency. While I do personally love this system, as it adds to the game's replay ability, it really could have been explained a lot better in-game.

Bluepoint has made some minor changes to the overall experience to make it a bit more enjoyable. For example, the game finally lets us travel between unlocked Archstones within one world instead of making us travel back to the Nexus just to re-enter the same world again, making exploring worlds much more enjoyable and a lot less annoying.

While I do understand that they wanted the remake to stay as true as possible to the original, I feel like they could have at least taken the freedom to remove the annoying inventory limit. I always felt like this was just an annoying feature that shouldn't have been in the game at all. It doesn't even add to the difficulty level or anything, it's just annoying. It was never even used in later games. Luckily, they have added an option to transfer gear and items directly from your inventory to the stash in Nexus while in a level, making it a bit less frustrating, but it still annoys me quite a bit.

While the original's sound design was a bit simple, with a lack of variety, the sound design in Bluepoint's remake is top-notch. It really adds to the game's already incredible atmosphere. Some hardcore fans, though, might be disappointed by the fact that the music has been re-recorded with an orchestra, as it does feel different from the original, but, to me, in a good way.

To summarise, Bluepoint Games once again proves that they are the absolute kings and queens of remakes, and this one is by far the best one they have made. As I mentioned earlier, I think this is the best looking game available on PS5, and I really mean that. It doesn't just look pretty, it also feels amazing to play (the DualSense's haptic feedback really adds to the experience as well). It is still the same punishing game, but better. If you enjoy a good challenge and have the patience, you should really consider picking this gem up when you get a PS5.

Gamereactor UK
+
The same amazing experience at its core, just with far better graphics and smoother controls. Reworked camera. Better sound design. Added photo mode.
-
It still has some of the same technical hiccups from the original game. Some old features are just annoying and could have been removed. The World Tendency system is still not explained well.
is our network score. What's yours? The network score is the average of every country's score

REVIEW. Written by Silje Marie Ruud Slette on the 16th of November 2020 at 12

The punishing From Software title has been brought back-to-life, looking better than ever on the PS5.

After a couple of big names left Sony Japan, another is following suit.

ARTICLE. Written by Stefan Briesenick on the 26th of December 2020 at 13

The Soulsborne community was able to solve the 'Door mystery' of the remake.

A new secret is blowing fresh air through central Boletaria.

We tackle the first boss in Bluepoint Games remade title. 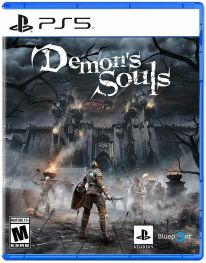