Homefront: The Revolution released earlier this year to a mediocre reception, and whilst the game certainly had its good points, most thought that the attempt to revive the series was lacklustre. It was full of issues from launch, many of which have since been patched by developer Dambuster.

In a recent interview the global brand and marketing director for publisher Deep Silver Paul Nicholls helped shed some light on why he thinks the game flopped - the main issue being that they launched too early.

"You can see in the market at the moment, quality is absolutely king and some big IPs have struggling figures at the moment." Nicholls explained. "We learnt a lot of lessons about what to do going forward. Not just the quality of the product, but when we launch as well." Homefront: The Revolution has since received a number of patches that have greatly improved the experience, but sadly many consumers have already jumped ship.

"We're getting a lot of positive feedback compared to when we launched, so timing was probably the biggest lesson we have learned there," Nicholls said regarding the updates. Unfortunately, it's little too late for the Homefront franchise now, and we highly doubt we'll see a new release in the series. What do you think of the game right now? 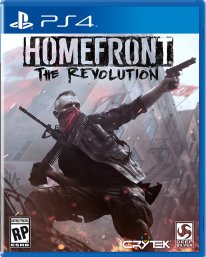