Never watched a character on stage or screen talk directly to you? Share their thoughts with the audience? Temporary forget about their fictitious role? If your answer is 'no', then you'll get some good lessons from a very special teacher: Deadpool.

He might look like Spider-Man, but he's not such a hero or big-hearted man. He's unconcerned, cocky and politically incorrect. A gun-for-hire mercenary before he got his powers, and has become an anti-hero for the ages, continuing his profession - and his loudmouth antics - for many years on the comic book scene (and you may have spotted him on Marvel Vs Capcom 3's roster).

He's irreverent and he likes to talk a lot. And like his other incarnations, he breaks the fourth wall constantly, talking to you as the player, the whole time you're playing his new game. You'll soon know about the kind of chicks he likes, about what he thinks on the current situation... or maybe he'll even tell you off when you're playing badly, or give you advice when in need.

During the first gameplay demonstration at Gamescom, this red and black spandex-clad hero sidles in close to the camera, cleans it, leans in and asks "any girls there?". He sung (or should that be bawled) Patsy Cline's "Crazy" during an elevator break. Checked out a lady's bosom in first-person mode. Shouted "boing boing" when on a bouncy castle. Turned to the camera again and stated: "guns don't kill people - we do". Its complete overkill, and perfectly in sync with the character.

All these examples prove High Moon's great initial effort for fan-service, a must for any Deadpool comic collector. The character's current comic book writer Daniel Way is penning the story, so it looks like this character's noticeable trademark stye will be there. But what else could you expect from a Deadpool game aside from the endless talk and shattering the fourth wall?

Well, this is a third-person action game, comic-style. There are platforms to jump over, enemies to knock down and even some puzzles to solve, everything following a linear path full of missions and objectives.

Deadpool is no doubt an agile and multipurpose character in terms of movement options. Whether he's wall-jumping or connecting several hits for super-fast combos, a fast action pace is key here. And for this to not become a stale beat em' up, we've got weapon variety.

There are melee attacks, ranged or gadget-based weapons, and then you can dual-wield the likes of pistols or Deadpool's well-known swords. The developers' goal, aside from giving the players different ways of killing, is that weapon choice changes the play style. As witnessed during the demo, it's not the same tearing up a group of bad guys with swords than choosing to use cover and survive a shoot-out from behind some columns: it plays completely different.

However, it's too early to say more about this game's prospects. It's really nice High Moon shared a gameplay demo this early on development process (almost unexpectedly so), but it's also easy to see there's a long way left to go. It's natural they first wanted to nail the comedian side, showing fans this will be a respectful effort - of course, don't think of this as just jokes and light-hearted stuff: expect the gore and violence that comes with the character too.

But, aside from text bubbles and enemies exploding in blood, we couldn't find a real comic finish to the graphics. Movement is still plain and somewhat ridiculous and we haven't a clear view of missions and gameplay possibilities yet. Here's hoping High Moon does the Merc-with-a-Mouth, and his loyal fanbase, proud. 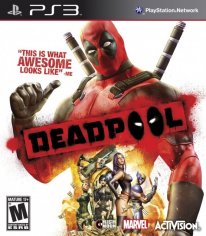