Deadly Premonition is a weird game. It has a place in the Guinness Book of World Records because the reviews it got were all over the place. It has been discussed as art and it's a game that, despite having a plethora of technical difficulties, managed to build a massive fanbase. And now, some 10 years later, we have a sequel.

Modern events seem to take place during the last moments that Agent York spends on this Earth. A tumour has taken its toll, and the old man is mostly just sitting in his house watching movies. York's adventures have had a bigger impact, and because of that, the FBI comes knocking, asking questions. In these sections, you only follow the story, and it's not that much of game.

The meat and potatoes of this experience are the events that surround the town of Le Carré in Louisiana, where agent York arrives set to spend his vacation. However, right after arriving there, a murder mystery begins to unfold. Le Carré is a freely explorable environment and the eccentric nature of the game is clear the second you step outside. You see, York's car has been stolen, but the thief left his skateboard at the scene, so you will not traverse by car but on a skateboard. Along the way, Agent York even learns some new skateboarding tricks, and you need to remember to maintain and upgrade your skateboard as you go.

Everything in Deadly Premonition 2: A Blessing in Disguise is a deep dive into madness, so don't go in looking for regular logic or reason. Every character is a stereotype of sorts and has one defining characteristic. For example, the owner of the hotel in Le Carré suffers from a weird case of schizophrenia, while the town sheriff has a big selection of one-liners at his disposal that he comes up with on the fly. Agent York is still a weird gentleman who has conversations with a guy named Zach who can't be seen by others. He also sits on a bunch of useless knowledge about classical movies.

After a few hours, the murder mystery itself, like the original before it, developers some supernatural elements. This time, it has to do with voodoo and in the deep south, where the game is set, it fits well. It is paramount that you have the right mindset when starting the game up so that the brilliance of the story can open up. You might not believe it at first, but Deadly Premonition 2: A Blessing in Disguise has a well-written narrative and we enjoyed it.

The problem is that the game is a bit too loyal to its roots. The game engine is clearly made for last-generation hardware, yet it still stutters, especially when moving around the open environment. The framerate is most definitely a big downside, and it's not pretty by any means. In a way, this B-movie aesthetic fits the environment, and I suppose that's what the developer was aiming at. The technical difficulties, however, are so common that they affect your ability to enjoy the game, especially when having to move through areas due to the lengthy loading times. Aside from regular stuttering the game also crashed during the first few hours and I had to ask for help from the developers. Luckily the solution was found, and an update for this particular problem is coming in the near future.

It's not all negative on the technical front, however. The user interface works great, and you get used to the action sequences as well. Shooting is not the most innovative element out there, but it's good enough for our purposes. It's no worse than in Resident Evil 4, for example. On the other hand, skateboarding is clunky, and the sound effects while skating are just horrible.

This mixed bag continues when taking a deeper dive into the mission structure. At times, the game follows its own crazy logic, and some sequences are just way too over the top. Following the logical thinking processes of Agent York is a pleasant experience to follow and play through, but gathering all kinds of random stuff found all over town is not. Yes, the guy living upstairs is hungry, but why is it Agent York's duty to go crisscrossing all over town to find food for him? The scavenger missions have another problem: they completely stop the narrative from progressing. You may be more interested in progressing the story, but no, you need to find squirrels in the forest for a couple of hours.

Deadly Premonition 2: A Blessing in Disguise aims for a style seen in shows like Stranger Things and Twin Peaks, and it mostly succeeds in this endeavour. The game's intro is one of the best I have ever seen, and the background song is just wonderful. It's a shame, that for every step forward, the game takes another step back.

Like its predecessor, Deadly Premonition 2: A Blessing in Disguise is an experience that probably shouldn't be given a score at all, so bear that in mind when considering the number below. It's a game that is hard not to recommend, but at the same time, it's the opposite. Solving mysteries and following the story is great, but the game engine is bad, the game is littered with technical problems, and missions are either great or horrible. And still, despite all this, I have to say that I enjoyed my time while playing through Deadly Premonition 2: A Blessing in Disguise. It is, for a lack of a better description, a blessing in disguise.

Gamereactor UK
+
Best intro ever, the story is wacky with an equally weird cast of characters, interesting environment and mythology, good user interface
-
Stutters and crashes, game engine shows its age, missions are either great or horrible.
is our network score. What's yours? The network score is the average of every country's score

"Like its predecessor, this is an experience that probably shouldn't be given a score."

Deadly Premonition 2 is coming to PC later this year

This follows its launch on Switch last year.

The update addresses the trans character portrayal as well as the frame rate to some extent.

Deadly Premonition 2 is officially available on Nintendo's hybrid console and we're hopping straight into the game on today's live stream.

Deadly Premonition 2's frame rate will stay bad, as the developer has no immediate plans to fix it.

Deadly Premonition 2: A Blessing in Disguise releasing in July

The sequel to the Twin Peaks-inspired horror adventure Deadly Premonition is set to release in July for Switch.

Deadly Premonition 2 is a Switch exclusive "at launch"

The sequel has only just been revealed, but careful wording by Rising Star Games indicates it could be coming to more platforms. 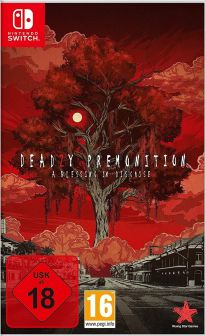