Do you remember Dead to Rights? Jack Slate and his dog Shadow? Well, guess what... Jack is back. According to a preview in the most recent Official Playstation 3 Magazine (US) Volatile Games (most infamous for Reservoir Dogs from 2006) are in charge of the rebirth of the series. Not to be seen as a remake, sequel or prequel the game will reimagine the franchise that has seen two main games plus a PSP offering already released. It also seems like the police dog Shadow has made way for a stray dog Jack adopts. The game will sport no number after its title and apparently no subtitle either in a move similar to what Ubisoft did with the latest Prince of Persia.

No official word from Namco Bandai on the new Dead to Rights so far, bur apart from the obvious PS3 version (with OPM previewing the game) there also seems to be an Xbox 360 version in the making.

Jack is back and those who stand in his way are about to turn into dog food. Literally.

Screenshots of a man and his dog

More screens of man and his best friend...

All about the characters

New screens from the reboot

Volatile Games tells us all about it

Jack and Shadow are back in this reboot of the Dead to Rights franchise. We had a chat with Volatile Games on the subject... 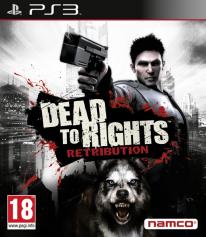