The original Dead Space's greatest achievement was its tangible atmosphere. The claustrophobic and disconcerting exploration was perfectly balanced by intermittent, delightfully disturbing action, and the third person perspective suited both excellently. Hence, it was no surprise that the gaming world held some reservations concerning Extraction, a supposedly simple game of on-rails carnival style shootouts. As it turns out, such reservations were completely unfounded, for Visceral Games truly knows the business of creating a scary game.

EA says that Dead Space Extraction is a "guided first person experience." Bollocks to that. Extraction is a virtual ghost train, where, instead of pointing your fingers at the denizens of the said ride, you point the Wiimote and slice them to bits. Every now and then you can choose one of two presented ways to go forward, but aside from that, the game runs unerringly on sturdy rails, leaving the player meet the mutated horrors of USG Ishimura at a pace decided by the developers.

The combat in Dead Space Extraction is based on dismemberment. The mutants sprout limbs and tentacles in all possible directions, and the only way to really kill such a hideous creature is to not decapitate the son of a gun, but also amputate a couple of its limbs, like, say, both of its legs. Rarely can any hellish monster be so terrifying as inside USG Ishimura's corridors, where this grotesquely mutated thing has just lost its head, and it's still crawling towards you with murderous intent. Combine this with an empty clip, and it's definitely brown trousers time.

In addition to the combat, the player solves some puzzles by running the Wiimote from one point to another like a welding torch. The puzzles are relatively fast and simple, and suit the game's general feel well enough.

The arsenal is familiar from the original Dead Space. The guns have enough kick and oomph, and each hit you score really shows and feels. The maps contain bonuses, but also essential updates to the weapons, e.g. improvements to the stopping power and clip size. The camera, unfortunately, spins too fast at times, and sometimes spotting and recovering items is more about strokes of luck than anything else.

However, the game is not all about blasting the bejesus out of the unnaturally transformed former crew members. The Dead Space Extraction experience has been made more movie-like by seamlessly intertwining the story elements with the action. While the characters think they're safe and launch into dialogue, the game keeps on trucking - at any point this lull in combat can be rudely interrupted by a surprise attack. Thus, while the player can collect items and reload weapons, lowering your guard is not wise. In addition, the game makes the player pull some stomach wrenching stunts in order to survive, and the motion sensing capabilities are used in particularly sickening but definitely genre appropriate ways. All this makes the player an integral part of the game, and helps keep the constant tension of the horror story up.

As for the story, the plot is exceedingly well written, and the characters are both believable and expertly voice acted. Halfway through the game I started noticing plot twists based on clichés of the genre, but once and again Dead Space Extraction managed to surprise me pleasantly. Only the ending, which happens just moments before Dead Space proper begins, seemed a bit lacklustre.

Audiovisually the game is sheer ecstasy. USG Ishimura is gorgeous, the abundant monsters are both modelled and animated superbly, and the weapon effects, like the colourfully radiant and lively stream of fire from your flamethrower, are simply astounding. Naturally all of this is a far cry from the original Dead Space, as Wii simply doesn't have enough oomph to pull off next-gen graphics. Sound effects play havoc with the player's nerves by alternating silence with full on audio assault. Together with the excellent story, the audiovisual offerings create a particularly intense and overpowering mood, which is rare for a game in this genre.

Dead Space Extraction is one of the top ghost trains in existence. The ride is both exciting and exhilarating, and has just enough of a challenge and length that you feel to pull for another run immediately upon completing the game. Ten missions sound like a few too few, but every one of them takes a good while to complete. That's one of the game's major downsides, too: although there are plenty of checkpoints, you can't save the game in mid-mission, which makes an hour-long run a bit too arduous a task.

I have to admit it. Visceral Games really exceeded all my exceptions with Dead Space Extraction. If horror and action sound like a perfect mix, there's absolutely no reason to give this game a pass, especially if you have a friend with whom to share all the scares and scars. Enjoy the ride! I know I did.

Gamereactor UK
+
Well written, relentlessly haunting atmosphere, challenging and long enough, a well-made co-op mode.
-
A bit too swiftly swinging camera, no option to save mid-mission.
is our network score. What's yours? The network score is the average of every country's score 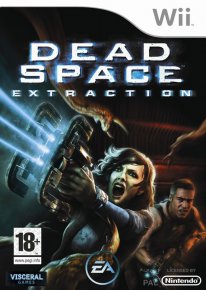