In Visceral Studios' office in San Francisco that answer is revealed as we witness the first gameplay of the studio's third entry.

There's no easy cinematic analogy. What we witness is Dead Space goes cooperative, with drop-in/drop-out both off and online.

The demo starts with Clarke hanging upside down, near frozen, face exposed: blood and frost cake his beard. He's not had the best day of his life.

Bruised and cold he pulls himself out of the hull of his crashed vessel, the burning wreckage scattered in the snow of the planet Tou Volantis. He fights out off snowdrifts, screaming and distraught when a new enemy, the "feet" Necromorph, attacks.

This fodder-enemy look like a human climber, but with demonic glowing yellow eyes and a climbing axe in each hand, the effect is creepy. Your dismemberment choices will create a new variation of enemy: rip the arms off him and the legs race towards you, tentacles sprouting from the upper half.

After a few more Isaac enters a windy and dense snowstorm. The storm's strength unleashes a snow drift that threatens to topple Isaac over the edge of the glacier; cue a fierce action sequence full of QTEs. After you spot a base, lit by the sunset and almost swallowed by the Arctic tundra. You note a small but impressive detail: as you stand still snow gradually accumulates on Isaac's shoulders. Move, and the snow falls off.

At the base's edge he meets his co-op partner: Carver. With a matte black suit and red lights, he's a more brutish version of Isaac. His role is yet unknown, but expect to be be important, as the entire adventure can be played co-op.

Carver's more aggressive in his attacks, and the game's dialogue adapts depending if you're soloing or teaming up. Your buddy marks more incoming Necros, the shout out causing Isaac to take refuge in a nearby shed, using his telekinesis on a generator to use an elevator. You're greeted with a giant Snow Beast Necromorph, its spider claw smashing the lift and trying to kill Isaac.

Thankfully an armour upgrade and a transition to smooth and stable split-screen action with Carter in tow, its a lot easier to take out the behemoth. As you move further into the base, you come across human opponents for the first time, and the ensuing gunfire initiates a subtle cover system and play style reminiscent of Uncharted.

Within we encounter another new Necro: a fusion of a four tentacles and head that can slide into dead bodies and reanimate them.

In the demo we saw dead Unitologist members who were transformed by Necros, who immediately begins to shoot at Issac, but fortunately these Necromorphs' precision is poor. Yet with the new danger comes the need for new protection: and Clarke's arsenal has become a lot more militarised.

In the demo we saw, among other things, a more general battle rifle, in addition to the classic weapons like Plasma Cutter. What we didn't, but that has been promised, is a brand new customization system, where you can combine abilities and upgrades from different weapons. Armor can of course also be upgraded. Each costume comes with different stats, so, for example, you can carry more ammo or get bonus stats to a weapon depending on the outfit.

Continuing on, Isaac and Carver use telekinesis in co-op to control a giant ice drill, using it as an added weapon against attacks, pushing Necros into its blades. However stopping it in order to progress is an issue; a quick snap of stasis to slow it enough to make precision shots at its engine finally sees the whirling death-machine stop.

Another pitched battle with human enemies begins, before being interrupted by a staggeringly huge insect-like Necromorph called the Nexus fills the screen. Mid-swipe we cut to the Dead Space 3 logo.

After the presentation the game's art director Alex Muscat shows some of the graphic and design differences between Dead Space games. Visceral Studios has worked on the environments this time and taken inspiration from 50s and 60s space adventures.

In addition, Muscat promised that it would maintain the claustrophobic feeling of being alone in space, although the environments are more open this time. "It's not Dead Space if you are not in space and in a spaceship," he says grinning. So if you are already longing for the weightless moments from Dead Space 2, do not worry. They will be back in Type Three.

The big graphic and design distinction is in the more open environment of the icy planet. The team outline how this time the story is about sheer survival.

With the game offering different stories based on either solo or joint excursions, and within each decisions that'll effect your story, you'd think Visceral has everything covered. But it reveals there'll also be extra side missions for those fans wanting that illusive 100% completion.

So, not Alien 3 then. No. Instead, think of Dead Space 3's main influence as John Carpenter's "The Thing". A new direction. But no less intoxicating a inspiration.

Due out next February for both console and PC, Dead Space 3 looks like it could make this tale of chilling horror one of the hottest titles of 2013. 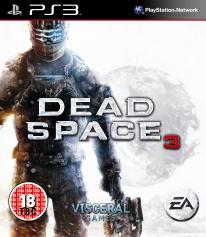