The Dead Space franchise is without a doubt one of the finest examples of where EA have managed to create and build a successful new IP this generation. In a genre that for a long time was dominated by Japanese games, Visceral Games managed to make a claim of their own, embrace science fiction and horror in a way that made us think of Alien and Pitch Black, while avoiding some of the frustrations that was starting to annoy us about the survival horror genre.

When Dead Space 3 was first revealed it appeared as if Visceral Games had strayed far from the original concept. If the first game was Alien, the second Alien 3, then the third was... well, Alien vs. Predator. Or so it would appear. An icey planet with massive monsters made us think of Lost Planet, and the idea of a more accessible experience that added co-op had fans up in arms.

It was very apparent that the demo we were treated to, showing off both a section of the game both in singleplayer and in co-operative play was intended to alleviate some of the fears that the game would stray too far from its roots.

The same, but different

And while we're still on Tau Volantis (the icey planet seen in the first footage from Dead Space 3), and the demo starts out with us being fired upon by a Unitology gunship from above, it quickly settles into the kind of Dead Space experience we've grown accustomed to. Patiently moving along paths and corridors with necromorph threats around every corner.

The addition of Unitology soldiers as enemies is going to change some of the Dead Space experience, but it may also provide us with a welcome change of pace at times. Perhaps adding that sort of encounter will add more impact to the actual survival horror parts of the game. It's hard to tell at this stage as we mainly dealt with necromorphs during the demo.

When playing the co-operative part of the demo the developers chuckled at my hesitation walking towards points where I knew necromorphs would spawn. I pulled back a little instinctively, having seen the singleplayer I knew where they would jump out at me. At some level I was telling my partner to walk first and that I would hang back a little. I'm sure this dynamic of players wanting to walk behind their co-op partner to give them a little extra time to react to threats, will be there in most every game of Dead Space 3 co-op online. At least that should be one of the objectives of the team as they try and adapt the concept to a co-operative experience.

But it wasn't just that I wanted my partner to be a meat shield of sorts, it was also the nature of the enemies we were about to encounter. The Twitcher. Easily one of my least favourite necromorphs with a distinct Asian horror feel to them as these corpses that were fused with their stasis modules when they turned move very quickly and utter horrific screeching sounds.

The Dead Space mechanics lend themselves very well to co-operative gameplay - one player can focus using stasis and telekinesis, while the other can cut off limbs and finish them off. With the new weapons systems that allows for customisation and combinations of weapons, each player will be able to tailor their arsenal more to their style of play. In co-operative play this allows for more specialisation, while if you play singleplayer you can construct a weapon capable of both crowdcontrol and dismemberment for instance. While we weren't allowed to sample the work bench in this demo, there is a lot of potential with this system, and we were shown a small drone you can send out to collect resources and scavenge parts so you won't have to check every container for materials to improve your weapons.

Fans of Dead Space will be aware of what dementia can do to your character, and while Isaac Clarke appears to have moved past his issues, Sergeant John Carver, is very much affected by his trauma. This makes for a very interesting dynamic in co-operative play as Carver's dementia plays tricks on his mind, and in certain areas that you only have access to in the co-operative campaign players will have wildly different experiences to deal with.

As Carver is dealing with the loss of his family he keeps seeing toy soldiers where Isaac sees nothing. These soldiers indicate that you can take an alternative route where you'll explore more of Carver's dementia and his backstory. In one sequence Carver was swept away by a hallucination where he was chasing his son across some dirt path, while in the real world Isaac had to try and shoot necromorphs as they attacked Carver who was running aimlessly down the hall.

There is some true ambition here and I can imagine situations where players will try and convey what they're seeing to the other player and in doing so furthering the narrative. If Visceral Games add a few twists and turns to this dynamic we could be in for something truly special here.

Dead Space 3 is different from its predecessors in many ways, yet the fundamentals are still there and they make up the bulk of the game. There are necromorphs to deal with, you need to manage your supplies and prepare to face whatever is around the next corner.

What's truly interesting, however, is how the co-op turns out. The ten minutes or so that we played showed a lot of promise, and if Visceral Games can manage to keep the same kind of experience throughout the game, they may have found new ways to play with our minds. 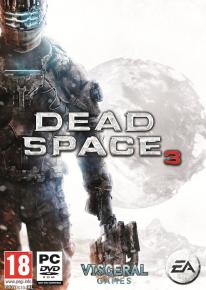