Frank West has been voiced by voice actor and movie stuntman Terence J. Rotolo up until the upcoming Dead Rising 4 where the series will use another unannounced voice actor, and fans aren't happy about the change.

In fact, they are so unhappy that there is a petition to change the voice back to Rotolo, a petition that has garnered over 700 supporters. Rotolo himself has even shared the petition on Facebook.

Capcom have been removing messages on its social media aimed at the issue, such as #FansRising or #RealFrankWest, so it seems they at least know that fans are upset. However, it is highly unlikely that they would change course this late in development as Dead Rising 4 approaches its release in December.

"In many ways, Dead Rising 4 steps even further away from the original game in terms of its structure."

The Dead Rising studio is no more.

As well as some new screens.

Play as Dante, Mega-Man, and Sissel in Dead Rising 4

They're part of Capcom Heroes.

With an extra mode that will please Capcom fans. 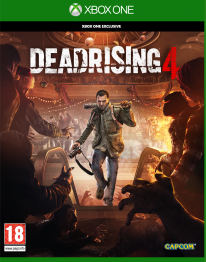