Just like Capcom, Temco Koei releases new incarnations of its fighting title at irregular intervals. Dead or Alive 5: The Last Round is the fourth Dead or Alive 5 game to be released, and as is customary with upgrades such as these, there are a number of additions and minor adjustments.

For those who completely missed it, it is the PS4 and Xbox One versions that'll be of particular interest due to the graphical boost to a game already that barely needed it in the first place. Clothes, hair and bodies now move even more realistically, and you'll notice fighter garments getting dirty and sweaty over the course of a match. Team Ninja should also be commended for having the game running in silky smooth 60fps at a crispy 1080p resolution.

What doesn't react realistically is the character clothing, emphasised further by the all-too-obvious clipping. It's as if the clothes were holographic, and while it's understandable the problems (and amount of time) Team Ninja would have in trying make the ensemble's wardrobes interact authentically, we'd prefer they slimmed down the selection and stuck with outfits that worked (though you feel some of the most elaborate - and lacking - costumes are built especially for the photo modes the game also offers).

The only other major issue is that the game still has issues translating weight and impact, with combatants feeling as light as a feather when they're flung away after a successful strike. DoA lacks the heft of Tekken, which is still the genre leader in translating the power behind its attacks.

I was never overly fond of the first Dead or Alive 5, but the updates have improved the gameplay to point that Last Round feels a much more balanced game than the original, though alterations are so minimal that if you're not a fighting expert you'll likely have difficulty noticing these changes.

It also means that if you've exhausted yourself on one of the game's predecessors, you'll not be revived by what Last Round offers. If you play a lot of DoA5 and want the latest, better-balanced version with improved visuals? Then the buy-in is worth it.

It's worth highlighting the online code. DoA has always set the bar high within the genre, and Dead or Alive 5: The Last Round is fortunately no exception. It'll still likely never be the choice of the true hardcore player, but you'll not find a better online fighter than this.

The game features the 32 character count of Ultimate, and added old boss Raidou and schoolgirl Honoka. The latter is but a mix of other characters, and while she may prove to be well-balanced in time, right now she's not fun to try out, given you've seen her moves before. I suspect, however, that the very nature of being an amalgamation of other fighter styles will make her popular with high-level players. For me though, I'd have preferred a brand new addition to the cast.

Along with the new character and a half, you're looking at 300 costumes to unlock, plenty of stages and droves of game modes to dig into. If you are hungry for a new fighting game and don't want to wait for Tekken 7 or Street Fighter V, or you want the best version of Dead or Alive, then this is for you.

HQ
Gamereactor UK
+
Balance is near-perfect. Plenty of content to keep you playing. Online code is sublime.
-
Not enough new to reignite interest of those burn-out by previous entries. New character isn't really new,
is our network score. What's yours? The network score is the average of every country's score

"If you play a lot of DoA5 and want the latest, better-balanced version with improved visuals? Then the buy-in is worth it. "

Team Ninja to reveal something this weekend

Could it be the first glimpse of Dead or Alive 6?

The Core Fighters version may well have helped this.

They're out now for you to enjoy.

Mai Shiranui released for Dead or Alive 5: Last Round

New character revealed for Dead or Alive 5: Last Round

Thank you for your time. We will take care of this matter as soon as posible
How can you seriously defend a blatant copying of content and total quantity over quality with an 8/10? DOA is my favourite fighting game but this game in itself offers so little its almost ridiculous, based on how much new content is offered by this game I would give it a 4/10, but as DOA 5 is already friggin awesome it raises the bar a bit... Still, Id rather save half my money on the last version.

This trend of fighting games re-releasing their games over and over, needs to stop... we have patches and DLC in 2015.... 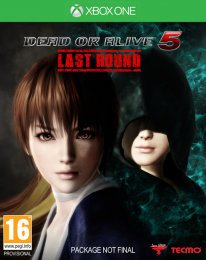