Techland has been keen to avoid calling Dead Island: Riptide a sequel, and with good cause; the setting aside, there's very little different from the 2011 original, which had players hack their way through a zombie-infested tropical paradise.

Action switches from the island of Banoi to the neighbouring Palanai. Once again we're treated to sun-kissed beaches, stunning vistas and plenty of content to chew through. The similarities don't end there, nearly all of the mechanics found in Dead Island are lifted straight from that game and dumped here, for better and for worse.

As a multiplayer game it's violent, gory fun. Played alone the enjoyment dissipates somewhat. In a perfect world the fun-factor would be replaced by tension and fear - this is supposed to survival-horror after all - but unfortunately this just isn't the case. This is because the only penalty for death is a restart a short distance from the place you dropped, and the loss of some cash - there's no fear, just the occasional moment of surprise.

Enemies are as you left them, depleted health bars remain, and so it really is just a case of hacking through until a section is cleared. Panic and dread drains from the experience, as the only price to pay the reaper is the inconvenience of losing some money, which itself is never in short supply.

This wouldn't be such an issue for the solo player if the story itself was worth experiencing, but the cutscenes are terrible, the script diabolical, and the dialogue so strewn with expletives it soon becomes tiring. It smacks of the worst kind of straight-to-video horror movie, and while it could be argued that it's tongue-in-cheek, even tongue-in-cheek can be well written, this is just plain bad.

Luckily, when played with friends, things start to pick up considerably. There's a drop-in/drop-out, meaning you can revisit previously explored areas with co-op buddies, and when you're charging around with a team of like-minded players, you can largely forget about the ridiculous plot and the ham-fisted manner in which it's delivered, and just have fun with the mechanics.

Most of the combat is melee, and once again you can dismember limbs, hack off heads, throw weapons into advancing foes and bludgeon your enemies into a second death. There are a huge amount of different weapons to play around with, from cleavers to spiked baseball bats, from guns to sickles, and each one can be upgraded and repaired at the many workbenches located around the island. You can find blueprints dotted around the map, allowing for further customisation, and there's some pretty entertaining mods to add to your already lethal arsenal.

There's a decent selection of undead critters to take on (though many of them are heavily inspired by other zombies games), and each requires a different approach. Screamers emit a banshee-like howl that stuns and disorientates; handless Butchers move with deadly speed; Grenadiers throw toxic chunks of flesh. There's many more besides, with extra powerful bosses - variations of the trickier zombies with additional abilities - presenting an increased challenge. This variety is a welcome facet of the game, even if taking down one of these opponents isn't so much about skill, but more about applying relentless pressure.

Riptide features plenty of waterlogged areas, with movement around the island via boat very precarious. The water effects themselves are basic at best, and Drowners charge you regularly, but they defy physics and never break the surface tension of the water. Steering is tricky, and when attempted alone it's easy to be dragged from your seat, and as with driving on land, the controls are not as responsive as one perhaps would like. That said, hopping in a jeep and ploughing through crowds of zombies is consistently fun.

The four characters from the first game - Logan, Purna, Xian and Sam B - make a return, and are joined by a fifth; hand-to-hand specialist John Morgan (he also has an upgradeable kick, which is hilariously powerful). As before Logan throws weapons into enemies, Purna is a gun nut - very handy in the late game, Xian is lethal with a blade, and Sam B is good with blunt weapons. Players start at level 15, to represent their past experiences in the first game, meaning you can start specialising immediately. You can also bring your character from Dead Island to the Riptide party, if you so wish.

Each of the five playable characters has an extensive skill tree to unlock, offering players plenty of ways to mould their character into the perfect zombie killing machine. You can either boost abilities with a certain class of weapon, or increase stamina and resistance to damage. There are a lot of options, including leveling up Rage abilities. As you plough through scores of the undead you charge up this power, and when the Rage bar is full, players see red and can unleash a short, but devastating attack on their foes. It's perfect for getting out of a tricky situation, or clearing an area of ravenous undead.

While there's a couple of rough edges here and there, on the whole the game looks very nice (if that's the right word to describe a zombie apocalypse). There's a few stiff player animations - the constipated shuffle of a character carrying a quest item never fails to raise a smile - but there's a decent amount detail in the environments, enemies are easy to identify, and the damage inflicted by your weapons is gruesome and visceral.

There's a ton of content to work through, a lengthy campaign that's peppered with numerous side-missions. These are usually of the fetch-quest variety, though some are still reasonably entertaining, and it means that the already sizeable single-player campaign is elongated even further. There are some technical issues, for example, at one point after simultaneously dying my co-op companion and I spawned in an area of the map that was completely inescapable, forcing a restart. Overall it felt lacking in polish.

There's a plethora of loot to unearth, upgradable and customisable weapons, and generous skill trees to unlock. Genre fans, and those who fondly remember the original, will likely enjoy themselves on the tropical island of Palanai, there's lots to do, and plenty of zombie slaughter to engage in as you go about your business. If you're planning on picking this one up to play with friends, you're much more likely to have fun with it than the solo player, which is worth bearing in mind if you're a Billy-no-mates looking for a solid single-player experience. If that's the case, or if you're not overly fussed about killing zombies, then the glitches, repetitive tension-free gameplay and shambolic storytelling should probably be enough to make you approach this one with a degree of caution.

Gamereactor UK
+
+ Loads of content + Fun multiplayer action + Customisation options and loot + Generous skill trees
-
- Lack of tension - Straight-to-video cutscenes and storytelling - Some technical issues
is our network score. What's yours? The network score is the average of every country's score

"This month we took a holiday to the tropical island of Palanai, but when we got there it was full of zombies. Did that stop us having a good time? Well..."

Pay what you want for a bunch of Deep Silver games.

Third week on top of the UK charts.

Dead Island: Riptide holds on to number one

No major movement on the British charts this week.

How horrific is a few hours in the sun with zombies really? GRTV answers. 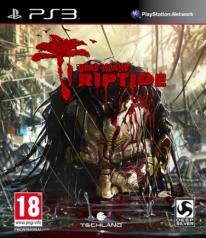