The tropical storm we heard so much about in the first game has finally hit, and a tidal wave has swept across the former holiday paradise - hence the title of the game. The zombies are still here, and our heroes, both new and old, are still fighting for survival. You will be able to import your old saves and use your character from the first game.

Luckily, they'll have more capable help this time, as a highly trained and well-equipped military team has landed on the island, and they're fighting on your side. This also means we can look forward to more guns and more resources this time around. The further into the first Dead Island you got, the more it focused on guns over melee. That's why Riptide includes even more guns, and with the support of your new army buddies, you're bound to get your hands on some heavy new hardware.

The developers from Techland have tried to shift the atmosphere a bit in Riptide. In the first Dead Island, you were almost constantly on the run, or at least on the move, always heading somewhere. That has changed in the sequel, and so we'll have plenty of opportunities to fortify ourselves, build barricades, place traps and in general try to hold our ground until the immediate zombie threat has been defeated.

We see an example of this as the game is demoed at Gamescom. The demo takes place around six to ten hours into the full game, and our heroes are stuck in the jungle. A church ruin conceals a tunnel that could be used as an escape route, but it's been flooded by the water. Conveniently there is a pump available to drain the tunnel, but it's noisy enough to attract hordes of zombies as you turn it on so we'll have to turn the ruin into a fortress that can keep the undead at bay.

The preparations take time. We steal a minigun from a wrecked helicopter, one we can place at different spots in the ruins. We fill the waters surrounding the ruin with landmines, firebombs and gas cans that will either detonate by themselves when zombies approach, or explode when shot. And finally we place barricades and fences by the entrances to keep out the zombies for a while - and these can be repaired or replaced when the undead horde comes wading towards us.

It's rather reminiscent of the zombie-maps from Treyarch's Call of Duty games.

One of the goals with these fortifying objectives, explains producer Sebastian Reichert, is to get the players to use all the stuff they collect along the way. We've probably all experienced situations where we kept saving our extra powerful grenades, health potions and whatnot, because we worried we might need them later on - only to still have them stuffed in our inventory once the end credits rolled across the screen.

With scenes like the church ruin, the game is trying to tell us that it's okay to empty our arsenal and bring out the big guns. We'll need them - and we'll come across fresh supplies later on.

Water is another important theme in Dead Island: Riptide. The tidal wave left several parts of it flooded. That also means we'll have access to new vehicles in the form of boats, new weapons better suited for water combat, more areas that require swimming, and naturally aquatic zombies.

Among the other significant additions is a new balancing system when playing co-op. Regardless of what your or your buddies' levels are, the zombies will be balanced individually to each of you. That way, zombie can be level 10 and level 50 at the same time, depending on what player's perspective, you're seeing him from. It's an interesting idea that we're looking forward to seeing play out in practice.

Dead Island Riptide is a sequel just the way we like them: more of the things that made the first game fun, new additions that could make it even better, both new and familiar faces - and vast hordes of zombies.

"This month we took a holiday to the tropical island of Palanai, but when we got there it was full of zombies. Did that stop us having a good time? Well..."

Pay what you want for a bunch of Deep Silver games.

Third week on top of the UK charts.

Dead Island: Riptide holds on to number one

No major movement on the British charts this week.

How horrific is a few hours in the sun with zombies really? GRTV answers. 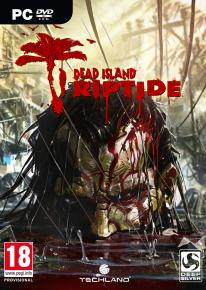