Set at the same time as the events portrayed in the first game, Death is on a mission to clear his brother's name after the early onset of the Apocalypse. It's a solid premise, and one that has given Vigil plenty of mythology to explore. After all, there are few characters as iconic and as enduring as the Four Horsemen.

After the opening cinematics we find ourselves in the midst of a snow storm. White flakes drift in and out of our field of vision. Joining us at the start of the journey are Despair and Dust. Despair, Death's trusty steed, is bathed in an ethereal green flame, and Dust, a bird of unknown origins, follows us closely at all times. After a short jaunt through the snowy landscape we dismount, ready to embark on the next part of our journey on foot.

The first thing that strikes us as we play through the opening minutes is that this is definitely Darksiders. Whilst Death may have a different gait to War, the world he moves around is unmistakably reminiscent of the first game. Not a bad thing.

It's not long before we've drawn Death's twin scythes and are dueling with some ice encrusted skeletons carrying giant hammers. Almost instantly the difference between the games becomes apparent; Death is a much nimbler character to control. War, the protagonist from the first game, was the strong, stoic type. Combat was a medley of block and attack, his lack of mobility forcing a very specific style of play.

Death is a completely different kettle of fish. For a start, he doesn't block. Instead he darts in and out of combat, landing blows before retreating to relative safety. As you would expect, he is very light on his toes, and is able to move around the environment with much greater speed and dexterity. It's a change of pace for sure, but from the short section of game we played, it's probably a change for the better.

Combat still retains a distinctive flavour, even if the execution is different this time around. It wasn't long before all the cobwebs were brushed away and we remembered some of the tricks we learned with War. We started launching enemies up into the air, pummeling them into submission with a flurry of blows. In this respect, it feels very similar to Darksiders, but we don't mind much; smashing grotesque creatures into the air and playing keepy uppy with their craniums was a real highlight in the original.

One thing that is different this time is the size and scale of the adventure being submitted by Vigil. Death uses his considerable mobility to great effect, and the emphasis on platforming is even more pronounced. Level design has expanded outwards and upwards, allowing greater exploration through the gothic architecture found in Darksiders II. The original was big, but the sequel promises to dwarf it in almost every way.

After we dispatched the first batch of icy skeletal grunts, we made our way into a structure wrapped inside the heart of a mountain. Our goal was to reach the summit, a meeting with the Crowfather the ultimate conclusion to Vigil's opening gambit. However, before that fateful chat at the top of the mountain, Death must navigate a series of challenging environments.

He does so nimbly, but there is also a sense of deja vu here. Whilst there is a greater flexibility to Death's movement, navigating the environment feels very similar to how it felt with War. To be fair, it was made clear to us at the start that Death has a sizeable repertoire of tricks up his sleeve, to be unlocked and refined over the course of the adventure.

From the off we were introduced to the basic skills needed to explore the world. The most obvious is Wall Run, which does exactly what it says on the tin. Mantle lets you climb higher or Wall Run further, using posts to propel Death on his way. Another new move is the Wall Bounce, which allows for chained jumps up narrow gaps with walls on both sides. Beams can be sprinted over, and pillars can be climbed and hopped between. The skills that Vigil has equipped their protagonist with point to large, challenging environments that will require both patience and skill to conquer. There was a moment during the opening level, whilst clinging to a pillar protruding from the ceiling and preparing to leap to the next handhold, where we felt the influence of one Ezio Auditore da Firenze. Those who have navigated the crypts of Rome and Venice will instantly feel at home traversing this otherworldly realm.

Clinging to ledges and running across walls is only one part of Darksiders II. Combat is still king, and the twin scythes not only look shit hot, but they are incredibly effective at dispatching lesser opponents. As the body count rises, loot is dropped by downed enemies, allowing for customisation on the go. We only picked up hammers and boots during our brief foray, but Vigil are promising a wide variety of collectables throughout the game. It's also randomly generated, making it important to check fallen foes as you progress; you never know what they might be carrying.

More RPG elements have been expanded upon. Most notably there are now extensive branching skill trees. It's the usual format of experience points means prizes, but there are a plethora of different ways to specialise your anti-hero. As progress is made, more skills open up, allowing for greater customisation. Much as you would expect.

One thing that is as clear as day is that Darksiders II looks good. It retains a similar style to its predecessor, but the visuals are crisper, and more finely detailed. It's a subtle improvement, but noticeable nonetheless. Darksiders wasn't an ugly game by any stretch, but the sequel is definitely the prettier of the two. Although we only saw a small slice, it looks as though Vigil has once again created a distinctive world to explore, with a unique aesthetic and a personality all of its own. There are many developers out there that would do well to take note.

Once again there is strong audio. The music is atmospheric and appropriately paced. Sound effects are clear and defined. Michael Wincott (of The Crow, Robin Hood: Prince of Thieves and Alien: Resurrection fame) provides the voice of Death, and he has been superbly cast in the role; his gravelly tone is well suited.

There was plenty that we didn't get to try out. Vigil were careful not to overload us with tricks and powers, preferring to offer a gentle introduction to proceedings. Death's twin scythes were the weapons of choice during the opening level, but he can also carry a secondary weapon. Light options will include gauntlets and a pair of giant claws that would make Wolverine feel slightly emasculated. Heavy weapons include the usual suspects; plodding hammers, maces and axes will provide an alternative to the lightweight scythes and claws.

Death also has the ability to transform into Reaper form, allowing him to manipulate large objects (in the inevitable puzzles littered throughout the world) and bring new moves to the battlefield. Reaper Attacks come as part of a combo, with brief flashes of Death's other form joining in the attack. Later on the Reaper Transformation ability can be unlocked, and when a meter has filled, Death will be able to fully change into the more powerful Reaper Form for a short period of time.

Death Grip gives our protagonist a zipline of sorts. He can use it to cross large gaps and as a means to pull himself towards foes at breakneck speeds. Soul Splitter will allow Death to split into two entities, Life and Death, meaning he can be in two places at one, and Voidwalker is an item used to create portals, granting access to previously inaccessible areas (it can be used offensively too, sending enemies flying into hazards).

Whilst we only got a small taste of what's in store for us in August, we were still mighty impressed with what we saw. Vigil looks to have taken everything good about the first game, and expanded on it considerably, creating a bigger, better world. Whilst we'll reserve judgement for a later date, Darksiders II is shaping up very nicely indeed. 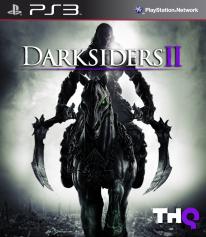