Landing on consoles with a fresh, new isometric perspective, Darksiders Genesis strays away from the third-person view those familiar with the series have got comfortable with. Genesis brought change with it, and in doing so, Airship Syndicate has proven that change isn't necessarily a bad thing.

With this prequel offering a fresh new isometric viewpoint, Darksiders Genesis is changing the game, so to speak. With gorgeous environments, linear yet explorable maps (each of which can be revisited for players wanting to stock up on some of that tasty loot, coin and upgrade pick-ups they may have missed), a smartly crafted gameplay, and an epic soundtrack, it feels like a Darksiders game without sticking too closely to the established script. The game feels familiar yet brand-spanking-new and fans of the franchise can expect good times ahead.

We know what you're thinking: "a top-down hack 'n' slash adventure with multiple skill wheels and loads of features can't possibly work when playing with a controller", and while the fear is fair, the assumption is wrong. Darksiders Genesis, in all its multi-skill, multi-ammunition type glory, works flawlessly on console and even those playing on PC will find it's preferable to play it with a controller in hand. The menus are busy but they're all easy to navigate by holding the shoulder buttons of the controller and toggling the menus with the right joystick.

The game also features a duo of characters, regardless of whether you're playing solo or in co-op with a friend. Manoeuvring two characters at once sounds like a hassle for those solo players, no doubt, but Darksiders Genesis lets you toggle which one of the grand personalities you would like to hack and slash with. Toggling between the two is encouraged, as you'll need to learn both characters' skills to get the full experience of the game, especially considering the fact that you take the form of the one you had snoozing once your main pick dies, and you don't want to tough it out using a character you can't play when the battle heats up in that molten lava-filled boss chamber.

That's not to mention the two characters, fan favourite War and playable newcomer Strife (whom, we will say, brightens the entire game up with his smug, condescending and comedically timed jabs at his Nephilim brother), have vastly different playstyles. The trickster Strife is a nimble little bastard, focusing on ranged combat and sprinkling caltrops as he escapes danger, while War is your standard melee warrior, slashing minions and bosses alike up close.

Each character also has fun skills up their sleeves, such as Strife's shadow clone, which you can deploy when Strife seems to be in a pickle, prompting some enemies to target the clone while it fires back at them and letting you fall back so you can pump them full of lead from afar. War has a mighty ground slam, dealing damage to unsuspecting enemies who dare to gather round him - don't mess with a horseman, that's all we'll say. The progression system is easy to understand. As you go through the game, you'll unlock various skills that you can then upgrade by making a visit to Vulgrim, either through the pillars spread around the world (with which you can also start a co-op session) or in-person in his vault. You'll also find various upgrades and collectables spread across the many in-game levels.

The console version does come with some issues that were not present in the PC version, however. We played the game on Xbox One X and since we had been playing it on PC prior to writing up this review, we had a superior version to compare it to. There aren't many issues, but the ones that do exist are clear as day. The main problem with the console version is the frame rate issues it brings. We encountered these minutes into the game on Xbox One X and while it's not bad enough to bash the console version over, it's noticeable when comparing it to the PC version.

The second issue is visual-effect based. Some skill effects show up wonky on console, and wonkiest of them all is that of the hellhounds' fireballs, which show up as blurry capsules on console (on the PC version they're crisp balls of fiery death). This may not sound bad, but when trying to dodge one's certain fiery demise, having projectiles appear bigger than their actual size messes with one's perception. Apart from these issues, however, the game is rather solid and for people without a gaming PC at hand, it's still a lovely version to play.

Those looking for a solid top-down hack 'n' slash adventure with plenty of playstyle customisation options, an epic world, grand environments, epic battles, collectables and upgrade options need not look further. This exciting 10+ hour experience will bring you plenty of joy and the gameplay alone is enough to keep you wanting more once the credits roll. Darksiders Genesis is a breath of fresh air and Airship Syndicate has truly put itself on the map with this one.

"Genesis is a breath of fresh air and Airship Syndicate has truly put itself on the map with this one."

Joe Madureira on future Darksiders spin-offs; "It's in the hands of THQ"

We chatted with the Airship Syndicate CEO about what comes next after Darksiders Genesis.

We take a closer look at Darksiders Genesis' Nephilim Edition

Watch our unboxing of the massive Nephilim Edition of Airship Syndicate's Darksiders Genesis.

Watch us play the console version of Darksiders Genesis

On GR Live today we're checking out the new ARPG on Xbox One. 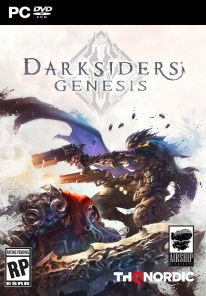