Dark Souls III is clearly inspired by the success of the PlayStation 4 exclusive, Bloodborne. Our undead warrior feels faster and smoother in Dark Souls III than in both predecessors, but not by completely doing away with that certain Souls feeling. Unlike Bloodborne, we still wield a shield and clattering our blade into a wall is still very much a possibility, which means we have to be more accurate and confident when we encounter enemies than we ever needed to be in Yharnam.

We start off (the first time) by leaving the tower and heading out on a wide stone wall that extends in two different directions. We choose to go right and there we encounter a pair of blood-thirsty white wolves in size XL; the beasts immediately kill our poor hero. We wake up by the campfire and head down the wall again, determined to get past these hellish hounds.

The controls are exactly the same as they are in the first two games and we soon dance around the enemies, muscle memory kicking in, rolling away from the wolves. With some quick sword attacks the two beasts are soon dead, and thus we can continue on our way over the wall. Around us looms a gigantic fort, with gothic towers and worn flags swaying slightly in the wind. Influences from Bloodborne show in the environment, although the lighting is not as gloomy.

Up on the wall we soon see a pair of long-legged, Tim Burton-like men and they attack us with unexpected speed. We roll around, but we get too cocky with our counter-attack and we end up dead. Now we need to start all over again, from the campfire. The same road, the same enemies. The wolves are slaughtered quickly this time, and when we arrive at those skinny enemies, we roll around them before attacking, getting a satisfactory stab in their more vulnerable backs.

Then we finally reach the end of the wall, which to our huge disappointment proves to be a dead end. All we can find are some basic items such as throwing knives and fire bombs. Oh well, let's turn around and see what's in the other direction. We're soon on what appears to be the right path because we get much further when heading in this direction. As usual there aren't any maps, so we'll just have to rely on our own powers of navigation - just as in the rest of From Software's titles.

We soon come to a dark little house, but fortunately we have a torch on us, which replaces the shield in our left hand. The flame casts a pleasant glow over the room, although some unpleasant folks are there waiting. We ignore them, however, and head off up a nearby ladder, which allows us to slip away from the danger and instead emerge into daylight where a new campfire awaits. Unlike previous Dark Souls games (especially the first), the third seems to offer more campfires, which act as save points. This is yet another page taken out Bloodborne's book, and another sign that this new Souls will probably attract more players who thought that the previous games were far too unforgiving.

The journey of discovery continues and soon we find ourselves on a beautiful rooftop, where pale figures are standing with arms raised towards what looks like hanging bodies. We feel too uneasy to dare remain among these creatures long enough to find out whether they're friend or foe, so we run past and find another ladder that takes us down to a part of the wall that we had previously explored.

Here we stop and just look around and take in the view. The fort we're staring at is really gigantic and the only thing we can do is dream about the dozens of hours it will take to explore the entirety of Dark Souls III.

Shortly after this moment of contemplation we step into an alley where a corpulent giant knight is tramping around. Despite its size, he is terribly fast and we barely have time to raise the shield before this mini boss has clubbed us down. Our life is almost zero, so we devour a health potion. We scroll through our items. We found electricity, and within a few seconds we've sprinkled our sword with it.

With renewed courage we take the sword in both hands, roll around and get in a few blows against the intimidating boss. The enemy's life goes down a notch, but he is far from dead. The boss throws a couple of quick punches to kill us on the spot. We restart at the last campfire and we're eager to take on the boss again, but our time with this demo is sadly over.

Unfortunately, it seems that From Software still hasn't done something about the lack of smoothness which has been a feature in their previous titles, and Dark Souls III has exactly the same uneven frame-rate as previous games. It really is about time that they upgraded the graphics engine. However, the aesthetics are so distinctive and inviting that soon we care more about the mysterious atmosphere than the choppy picture.

We leave Dark Souls III with a newfound desire to revisit the series. The game feels like a perfect hybrid of Souls and Bloodborne, with the style and energy provided by the first games blending well with faster action that makes us think back to our nights spent in Yharnam.

We've no idea what the story is, where we found ourselves, or exactly which way we needed to go to get to the next area, but it is precisely this mystery and uncertainty that is most appealing when it comes to the Souls series. April, and the repeated deaths that will come with it, can't come soon enough.

It's the latest game to receive Xbox FPS Boost support. 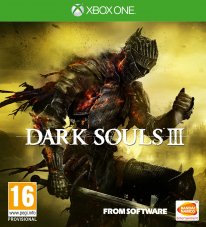