I really miss the "What if"-comic Marvel published many years ago. Where their super heroes by a twist of fate got everything else changed so nothing is the way it normally is. I remember being especially fascinated by a particular adventure where Spider-Man got enormous spider legs growing out of his body, giving him a rather monstrous look. Which changed pretty much everything since those are pretty hard to disguise and made it a lot harder to score with a beautiful girl like Mary Jane.

So why am I debating giant spider legs and Mary Jane here? Well,that's not the point, I meant to discuss "what if?" scenarios. And Damnation is a really interesting example of that, with a nice story about an alternative ending to the American civil war. You are the rebel Hamilton Rourke, who happens to look just as corny as his name sounds. Being some sort of stereotype cowboy with a baby face.

He is fighting off villains together with some other stereotypes, including the mandatory bikini equipped Indian girl who happens to be able to heal folks with her special powers that so many Indians in video games possess. Unfortunately for Hamilton Rourke (and you), the allies are completely brain dead and don't do anything of value. In fact, they might even block the way for you and make it harder to reach the places you need to go. Artificial stupidity.

Many games before have survived the frustrations of poor A.I., but in Damnation, the list of bad things just continues. The developers bragged a lot before the game was released about how they completely remade the action genre by building vertical levels where Rourke really got to show off his skills while climbing upwards. And this was supposed to be just one part of the game together with Gears of War-looking action sequences and cool vehicle combat.

I am sorry to have to say this, but absolutely nothing of this is true. The vertical levels aren't as good as in games like Ninja Gaiden II or Prince of Persia, the action is nowhere near as good as Gears of War 2 and even though the vehicle combat is the best part of the game, it's still just mediocre (which says a lot about the rest of the game). It just feels like the characters are floating above the ground, and the cheap rag doll effects appear to the be from a mediocre game from the last generation.

The cheap looks continues to spoil the experience throughout the game highlighted by blurry textures, blocky characters, bad animations and non existing physics. Damnation is an extremely ugly looking game, and the fact that this game once started as a Unreal 2004 mod does shine through. The production values are there though and the variation to the environments and the scale of things just makes me sad when I realise how much wasted opportunity there is in Damnation.

The interesting plot and concept behind Damnation has been completely ruined by the fact that the controls are bad, the graphics are hideous, the voice acting laughable and the weapons come off feeling like you are firing soft air guns under water. Damnation should be avoided at all costs and isn't even worth to buy even used or on a big sale, it's just not worthy of your time.

Gamereactor UK
+
The vehicles are quite fun, the idea behind the story is good
-
Really bad level design, the controls sucks, the dialogue is worthless, stupid AI, boring weapons
is our network score. What's yours? The network score is the average of every country's score 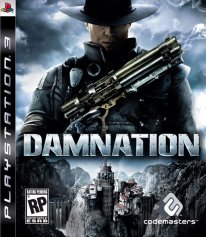