For some reason, as a species, we are drawn to ancient, long-forgotten temples. These relics of previous civilisations bring promises of untold fortunes, yet somewhere along the way lose the irrefutable danger associated with them. This gamble of reward and ultimate loss is what makes Passtech Games' latest roguelike temple explorer unique.

In Curse of the Dead Gods, you take up the mantle of an explorer brought to a notorious temple in search of fortune, otherworldly powers, or perhaps even the secret to immortality. What you find instead is a terrifying nightmare with seemingly no escape. Built as a roguelike, your duty will be to delve as deep as you can into the temple, searching for the powerful being lurking within, as doing so is your only hope of escape.

As you'd probably expect, Curse of the Dead Gods is rooted in exploration. In its current 1.0 state, with the game in early access, there is one temple to face in the Jaguar Temple. Within its walls are four paths to challenge you, each varying in difficulty and length, from short and easy to what can only be described as your worst nightmare. As you move down each of these pathways, you'll have to choose the direction you want to go by selecting the kind of room you wish to face on a rudimentary and randomised map, plotting the best path to the final chamber where terror lurks. Each of the rooms you face has its own unique style that determines its variation, from offering a specific type of loot to being a haven from danger, i.e. Blood Fountains (one of the few places in the game where you can heal). The choice is yours, but death is final on each run, so take every decision strategically, else it'll be your last.

Aside from making every decision count, you'll have other things to worry about during every run. The Jaguar Temple is home to countless spikes and fireball traps, as well as six species of monsters that vary in strength and their ability to kill you. At the moment, you'll face magic-wielding spectres, axe-carrying golems, and ferocious demon-like creatures (their names are elusive currently since the title's Codex is inaccessible in its early access state). Needless to say, every enemy has their own mechanic to learn and overcome as well as different health pools to work through.

The other threat you'll face in the temple are powerful bosses with massive health pools, devastating attacks, and completely unique attacks mechanics. These are known as 'Champions' and are found at the end of a path, or at different stages dependant on the difficulty selected. For example, the second path in the Jaguar Temple will require you to face two bosses, one at the half milestone of the run and one at the end. The first you face is known as Kiliz'Puzah the Blood Hunter, and he uses two large spears and jaguar allies to beat you down. Upon taking down a boss, you'll be rewarded with two pieces of loot, a bunch of gold, a reduction in 'corruption', and the ability to cleanse a curse, a particularly helpful feature for longer runs.

At the beginning of a run, you start with a torch that's designed to illuminate dark places and reveal dangerous traps, as well as a machete+pistol combo. These take up two of the three weapon slots and can be upgraded or switched out with items found throughout the temple for better damage and new fighting styles, however, it is worth noting the torch cannot be changed at all.

On the topic of combat, Curse of the Dead Gods offers many fighting styles to master, from simple hack and slash swords and clubs, to larger heavy weapons. Each weapon, which is either looted off a dead enemy, found within chests or acquired as a reward from choosing a weapon room in the map, has unique statistics and a special passive. This does mean, you could be really fortunate and find our favourite weapon, the Godslayer (which has crushingly high damage and a passive ability great for tackling bosses) or just a simple machete with disappointing damage values and no passive at all.

To make combat more interesting, there are some moves you can make to increase your survivability, such as evading with dodge rolls, parrying and performing counter strikes, and executions, plus landing perfect ranged attacks. The catch with these is they usually depend on the weapon you use, for example, you can't attack from range with a sword and shield, likewise, it's worth noting evading uses stamina meaning you can't Dark Souls your way through levels, you have to give it time to regenerate especially when using heavies, which require stamina to swing. The intricacies of Curse of the Dead Gods combat system is something that isn't immediately apparent when playing but as you spend more time trekking through the temples, honing every move you make and taking as little damage as possible, it becomes increasingly important, especially in longer, more challenging paths.

Character development isn't limited to just finding new gear either. Throughout every run, the opportunity to upgrade base stats or acquire special passives are presented through facing different rooms. As mentioned with weapons, if you choose to head to a relic room at the end, you'll be able to find a new relic to unlock or equip. As with all aspects of the title, however, everything comes at a cost.

Purchasing new items or weapons requires either gold (looted from the ground, enemies or chests) or, less desirably, your blood. Whilst this may seem to be trading health for loot, its actually a new mechanic known as 'corruption', which is automatically gained at the end of every room as you move to another. There's no direct negative to acquiring more corruption however it does unlock curses as you move further down the line. These are powerful passives that have both negative and positive repercussions such as floor gold being worth much more, however, after being spotted, it disappears after a few seconds. The main difficulty with being cursed is you'll never know which one is coming, making for an interesting gameplay experience when something really bad lands on your plate, such as hallucinating when damaged.

With Curse of the Dead Gods being a roguelite, all upgrades and equipable items are lost at the end of a run, which is precisely why it's important to collect the glowing blue skulls that occasionally drop from enemies, as they can be used to purchase permanent upgrades in the Underworld at the main hub. These passives can provide a large sum of gold at the start of a run or allow you to take more corruption before landing a curse, so choosing and equipping the right one is important.

So far, the biggest issue that has presented itself is the randomly generated factors. There are runs where you find no decent loot at all, or the only direction in the map featuring a Blood Fountain (the aforementioned haven where you acquire health for added corruption) leads you to miss all the good gear, basically dooming you to fail. This can be a little frustrating but with all the proposed plans and additions coming to the title in the roadmap, the extra content should hopefully balance out the problems.

On a more positive note, the art and sound direction make for great gameplay. In the Jaguar Temple, the cross between the Mayan architecture and the Pitfallesque visuals make for an interesting experience. Likewise, the jungle drums soundtrack captures the essence of Victorian, late 1800s exploration, which seems to be the time period the title is set during.

All in all, Curse of the Dead Gods is a great start. The mechanics, movement and combat feel tight and the variety of enemies and boss encounters feels routinely enjoyable. Whilst the RNG factors affecting the available pathways on the map and the dropped loot can seem a little out of whack at times, considering the title is in early access, the promised content ahead provides much to be excited about. Anyway, back to the temple in search of treasure. Fortune and glory, kid. Fortune and glory.

The roguelike made its way out of Early Access earlier this week.

Curse of the Dead Gods set for Xbox One, PS4 and Nintendo Switch release on February 23

The indie roguelite is looking to a full release, following a while in early access.

In Passtech's new roguelike you really will get killed in the hunt for fortune and glory. 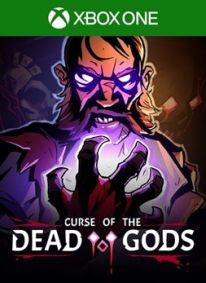