We learn more about the multiplayer of Crysis 3 with multiplayer lead designer Adam Duckett.

On the new Hunter mode:

"Initially it's quite slow paced, quite stealthy game. As the hunters eliminate the CELL operatives they then become hunters. So what you end up with is sort of a sweet spot of around, you get 2 versus 10, then you get 5 versus 7, and slowly it turns from a stealthy gameplay into more action gameplay. And at the end of the two minutes rounds you end up with CELL operatives that are trying to fight off ten, eleven hunters and it gets quite frantic."

On the 8 multiplayer game modes found in Crysis 3:

"We've got some game modes that are making a reappearance from previous Crysis games - the games we are showing at Gamescom would be the Crash-site game mode from Crysis 2 and also the new Hunter game mode. There is a new unique one that is coming out, but we'll be revealing that closer towards release."

On map design and larger levels:

"One of the decisions we made early on in the Crysis 3 multiplayer development cycle was to de-couple sprint energy from nano suit energy. So it actually means you can use more of the power sprint, the power jump to navigate your way around the maps. Which in turn allows us to create larger environments. So on a whole the maps in Crysis 3 will be a lot larger than the ones seen in Crysis 2."

"Forget waiting for the next generation of graphics to appear: they're here already, and that we can thank Crytek for."

The Crysis trilogy now playable on Xbox One

Maybe calmer waters are ahead.

PS Plus titles for August announced

The exodus continues as Mike Read leaves his position.

Visit The Lost Island in June.

Crysis 3 holds on to first place

No major releases makes for few changes in the latest chart. 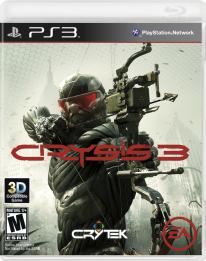