In October 2010 I was sitting right across from the Crysis producer Cevat Yerli and listened to him talking about the sequel to the world's best-looking game ever and heard him say words like "urban jungle" and "beautiful disaster". About how the tempo in Crysis 2 would come down to the player, that it would be freedom done right. "Bullshit," I thought. "Typical PR bullshit." I had that very morning played through the chapter "Semper Fi or Die" and the lack of freedom, potential and that urban jungle was total.

But I should have known better, that Yerli isn't a Peter Molyneux, that his rethoric isn't tuned by the hype-machinery. Because when I'm after a few minutes into Crysis 2 is exploring a big park at the edge of New York, I understand exactly what he meant. It is an urban jungle, and I instantly get a taste of the freedom I was promised. The difference is that tempo and the focus of the game are more cinematic and more choreographed than in the original. Large areas filled with potential are mixed with tighter, linear passages where the story gets more room. It's a natural evolution of Crytek's concept, yet just as entertaining as the previous.

When Crysis 2 begins, New York is in flames. The alien Ceph have taken out all living things with a deadly virus and then bombed down town Manhattan to pieces. From the dead, the aliens have been harvesting tissue and the military has been decimated until nothing remains. The player, a wounded nobody, gets to don the classic and lethal Nano-suit and is given the mission to fight back against the Ceph and save Alex Ghould, the leader of the resistance.

The suit, its origins and its incredible capacity, is the center of Crysis 2's storyline. But it's far from the most convincing story in the history of gaming. The dialogue often feels over the top and the characters feel flat and uninteresting. Crytek have clearly been inspired by Half-Life 2, but they never even come close to Valve's league despite their high ambitions.

Instead it's the firefights, and all the freedom of choice, that make me giddy with excitement when I play Crysis 2. You can play it just like you would Call of Duty, just keep the fire-button pressed through the whole game. You can also sneak your way through it, evading most enemies on your way. You can build traps, trick your opponents and play strategically. I let my imagination run wild; I place a bit of C4 on a car on top of a parking building, then make myself invisible and kick it from the roof so it lands on top of two armored vehicles below. Then watch as the whole platoon on the ground catches fire.

It's about mixing it up, about trying your way forward - then try some more. And while you're often in control of the tempo, it's never slow or boring. There's also the spectacular graphics, something all of Crytek's games have had. Its design is an exciting contrast to the jungles of the original, and New York is filled with destroyed landmarks, ruined neighbourhoods and the beauty of disaster that Cevat talked about. The amount of detail is insane, and the effects are incredible. The console versions are, of course, not as fancy as on the PC, but they are still fighting for the top spots when it comes to being the graphical kings for their respective formats.

When it comes to multiplayer, Crytek have put in a lot more effort and the former Free Radical-team has done a good job creating some original and unique that is still easy to get into. The balance between the different classes is good, and the level design works very well.

Crysis 2 has a lot of cool weapons and Nano-upgrades, incredible graphics, great game mechanics and a lot of variations. The single player campaign took me about 13 hours to get through and had tons of action all the way. It would simply be a shame not to call this the best action game so far this year. Crytek have done it again.

Gamereactor UK
+
Great graphics and sound, intense action, good tempo changes, fun weapons, tons of variation
-
Weak story, some rather boring dialogue
is our network score. What's yours? The network score is the average of every country's score

Thank you for your time. We will take care of this matter as soon as posible
"But it's far from the most convincing story in the history of gaming. The dialogue often feels over the top and the characters feel flat and uninteresting."

And this is based on what, exactly? I'm sorry, but I refuse to believe that Richard Morgan (the acclaimed sci-fi writer who wrote the story for Crysis 2) could deliver anything short of spectacular story and characters.

I'm quite sure you have absolutely no idea what you are talking about. If you believe you do, you need to be more precise with such bold statements. Unless that's properly addressed, this review has absolutely no credibility.


Thank you for your time. We will take care of this matter as soon as posible
@djlceman

It's based on Petter's time with the game, and he's fully aware of Morgan's involvement with the title.

Petter's a massive fan of the game (as you can see from the glowing review and score) yet even with that, he still believed that the story was one of the weakest parts of the game. Despite the ambition being there, the plot was neither memorable or epic, and the dialogue wasn't great.

As for it being penned by an acclaimed sci-fi writer, who pens the script doesn't automatically ensure it'll be the greatest story ever written.

For one, you've got to remember the worlds of writing a novel and writing a game are quite different. A writer's got to take those differences into account. There's less time to linger on fleshing out characters, places in games than you can in novels- and this is FPS, not RPG.

I'm sure you've seen movie adaptations of popular novels - the end result can be quite different from the source material. The medium mutates the experience. There's nuances and detail in writing that will be lost in the transfer to the big screen, as a novel of 500+ pages is whittled down to a two hour movie (or three of 'em, as with Lord of the Rings.)

Also for the most part, writing a novel is solitary experience - creating a script for a game means working and liaising with a team, and within the development process things can alter and change outside the writer's control.

The writer has not complete say over the situation, but must adapt and work to the whims of others.

In all, something is going to get lost in translation.

The subject is something that would be worthwhile looking into for a future article on the site. Stick around, and in the near future we can dig into this some more.

Thank you for your time. We will take care of this matter as soon as posible
@Gillen McAllister

I know how he feels about the story of this game. If you look at my comment, you will see that I even quoted that.

The question isn't what he feels, but why he feels the way he does.

As for the comments about novels and games being different, I agree. So does Richard Morgan. In fact, here is an interview with him, where he precisely points out what you just have (and much, much more):
http://www.g4tv.com/videos/45272/Crysis-2-Lead-Writer-Interview

The reason I brought up Richard Morgan is because I know he knew what he was doing and I know that this game can't realistically "fail" in this department.

And even if some dialogue isn't good, it doesn't really warrant a "weak story" as a full-on minus.

Basically, if you're going to make such a bold statement, you need to know EXACTLY what you are talking about and be able to explain EXACTLY why you have that opinion.

This review just says that "yeah, I don't like this story, it wasn't memorable to me" and that's it. No explanation. Just that. That's what I have a problem with.
Thank you for your time. We will take care of this matter as soon as posible
I would suggest playing the game before you complain.

What's really biased is claiming an author, that you apparently like, can't possibly write a script that's under par. He's human, isn't he? 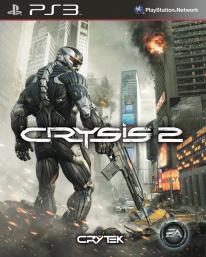