At the Devolver Digital lot at E3 we got the chance to look at a demo for Serious Sam 4: Planet Badass, and after that Croteam level designer Nika Dvoravic joined us to talk about the game and what Sam is doing this time around, including the rather impressive level that we'd just been witness to.

We also asked about the level we saw a demonstration of, to which Dvoravic said:

"Well, we promised 100,000 enemies on-screen, and this is a huge level, and it's possible. The level we showed is 80 times 80 miles, so it's a huge, huge rural area. It's called Countryside and you can drive around, you can look at the houses, you can look at the countryside, and kill some enemies."

"We know what our fans like and we kind of want to go back to our old roots, kind of more open levels, more enemies, fun, and just a general killing spree."

Are you a Serious Sam fan? 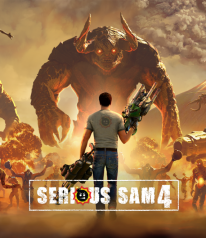