Cristiano Ronaldo, recent winner of La Liga and the Champions League with Real Madrid, is the cover star of FIFA 18. Electronic Arts has just released the first trailer for the new game, that's coming out September 29 on current-gen and old-gen platforms (and EA has confirmed there will be versions for PS3 and Xbox 360 this year).

After a transitional year, CR7 replaces Marco Reus as the main star of the game. There is also a special Ronaldo Edition that comes with three days of early access.

In the trailer, Ronaldo is the main and only star. He carries the ball forward in a match against Chelsea FC until a challenge by a defender stops him in his tracks. It doesn't matter, though, it's a free kick from a perfect position to score. The short video with footage from the "game engine".

"The world's best player has helped fuel the biggest leap forward on the pitch that we've ever delivered," senior producer Aaron McHardy said. "We are extremely excited to partner with Cristiano - working with him we learned a lot about his unique play style and what makes him so special. His passion, energy and global fanbase make him the perfect ambassador for FIFA 18."

Finally, the man himself had this to day: "It is a real pleasure to be on the cover of FIFA 18. It's a great feeling and I am grateful to have been chosen." 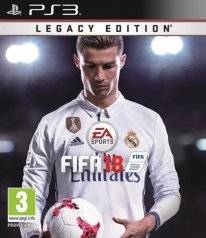