At Gamereactor we recently reviewed horror game Bendy and the Ink Machine from theMeatly Games Ltd. (or Joey Drew Studios, as they're also known for this project), and since we enjoyed a lot of the different elements at play here, we had a lot of questions to ask about the ideas behind it and how it was made. Lucky for us the studio's Mike Mood was on hand to answer some of our questions, and give us a peek behind the curtain at the process of creating a cartoony terror.

As they say, the beginning is a very good place to start, and so we asked about where the ideas came from in the first place. "The origin of Bendy and the Ink Machine was simply from the idea of 'What would it be like to walk around a world that has been sketched' and once that was conceptualised in an environment, it naturally seemed creepy, so as time went on, Bendy was born," Mood explained. "By the time people play through the game and look at all the theorise that exist on what it all means, they'll start to understand what this world really is."

The character himself wasn't actually always the focal point though, as Mood adds:

"Bendy was just a quick concept to add a cartoon character into the world when testing the sketch environment. Since it fit, and it seemed creepy, the thought was to just go with old 1930s cartoon characters since they just naturally look creepy this day in age."

The entire game takes place in this studio that used to manufacture early 20th-Century hose pipe style cartoons much like Cuphead, featuring characters like the titular Bendy, as well as Alice Angel and Boris the Wolf. What's important about the game though is that the world itself is also stylised, which tends to go under the radar in the presence of these old-fashioned animations. The 3D world is presented in this sketch-style manner, especially when looking at the outlines and the finer textures, and thus it feels like you're walking through an animation in itself, especially with the yellow hue that everything is bathed in.

As we progressed through there were several elements that reminded us of Bioshock; a comparison that works in Bendy's favour. The most obvious comparison is that both of these games have horror elements based around earlier periods in the 20th-Century, and even the owner of the studio, Joey Drew, is reminiscent of Andrew Ryan in a lot of ways. Both had visions that consumed them, leading to their downfall and the ruin of everything they had built in the first place.

"[The] majority of our team are big Bioshock fans, so yes, lots of inspiration from Bioshock," Mood said. When we asked about what specifically he said was inspired by Bioshock, he then added: "Lots of our visuals, the concept of dripping ink (water) everywhere, and of course the time period."

"To be honest most of what we created was just out of pure creativity, Bioshock was a great inspiration for the visuals and era, but Bendy and the Ink Machine was just a unique accident."

What also resonated with us most when playing through were the audio logs, which reminded us a lot of Bioshock. In Rapture you would find these logs to flesh out the world and provide light clues on things you could find, and here it's the same. One that sticks in our mind most is an unknown voice heard screaming and gurgling, which really works to build the atmosphere and the concept of this ruined world. It's simple but effective environmental storytelling, helping to give backstory to this world while at the same time leaving it empty and abandoned.

Of course, this is a horror game, so we couldn't help but ask about their philosophy going into this genre since of course there are various ways of deploying scares. "Don't put jump scares every two seconds just because, and make the environment eerie enough to create an ambient horror effect," is Mood's motto, as he explained.

In the first chapter of the game there are perhaps the most jumpscares, and that's because you have no weapons and are simply exploring and solving puzzles. Cardboard cutouts pop out at you and... other stuff happens that might give you a shock, but as the game progresses and the monsters show themselves more, this horror moves from jumpscares and tension into atmospheric exploration, sprinkled with some light combat.

"We never set out to make a combat game, but the need for gameplay was definitely clear," Mood explained when asked about fighting with weapons like axes. "Without any of the combat sequences, we have a game of walking around and solving puzzles, there needed to be some kind of action element to it. This ultimately helped us tell a better story."

Then come the puzzles. As we mentioned in our review, with a runtime of around 3-4 hours the game never keeps you stuck for long, and that applies to the puzzles more than anything. You don't get left scratching your head, and the game always points out where you need to go to find solutions, with diverse and varied objectives keeping things fresh as you push through.

"If it's hard for me, then it's too hard," Mood explained when asked about the difficulty in particular. "We have one person on our team, where if it's difficult for them yet they can beat it, then it's just right! Don't tell him I said that though."

Taking a step backwards, we got onto the topic of the development process. The first chapter was originally released back in February 2017, and upon being well-received by fans, we eventually got more chapters and then the complete edition for PC, PS4, Switch, and Xbox One this winter, collecting together all of the content in one to resurface the ongoing saga for new fans like us.

"If we could do it all over again, we would have released it differently in more complete separate packages," Mood says. "The way we developed the game basing it on DLC was very difficult and a time-consuming process. Ultimately we decided to shift to one final product because we felt that's the complete game, there's no more to the story of Bendy and the Ink Machine, it is complete. However, the process of releasing episodes was very successful for us, it helped us engage with our fan base, and learn from all of their videos and feedback as we developed. So as tough as the episodic development was, it was the right move, just, maybe we'll do it a bit different if ever we were to do that kind of game next time."

If you were to look at the archives - the extra chapter you receive upon completing the game - then you can see how many things changed as the game went on. The ink enemies, for example, were modified from their basic early forms to become more like hose pipe cartoons in their animations, as well as becoming more defined. It was an iterative process of refinement, then, one that culminates in what we have now.

The community that rallied around the game when it first came out has now grown even further, so much so that there is now plenty of merchandise, online discussions, YouTube videos and streams, and more all dedicated to this horror game. What's good to bear in mind too is that this is only a 12-rated game, and so it's not just adults enjoying the scares.

"Bendy and the Ink Machine has been available on PC for almost 2 years now, so our fan base has been super active that whole time. We receive countless messages from fans that love the game, fans that because of the community made new friends, and I cannot count the number of times a parent had reached out to me to just simply say thank you for giving their kid something that made them happy. A humbling and rewarding experience this has been," Mood says.

When we asked specifically about what it meant to Mood to have such a dedicated community of fans, he said: "It means we're not done with Bendy." We then had to press him on whether we can see more of Bendy's universe moving forwards, to which he said simply: "Yup!"

A very mysterious answer, but considering we already have this as well as a mobile game called Bendy in Nightmare Run, there should be enough to keep us entertained until Bendy and his friends come back in whatever form the next game takes. It's certainly a unique title in a world where so many horror games can feel the same, and it's unsurprising that it's gotten where it is with a style like this and a mascot like Bendy. Let's just hope that we don't have to wait too long before Joey Drew Studios lets us through its doors once more...

"Bendy is one of the most unique horror experiences we've played in recent memory."

Kindly Beast lays off most of its staff, and there were reportedly deep issues within the studio.

Creating a Monster: Bendy and the Ink Machine

We spoke to Mike Mood about the unique horror game and how its art-inspired characters came to life. 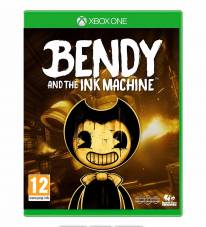