Create "is powered by your imagination and rewards you for being creative ". That's how EA describes the latest game from EA Bright Light. An inviting concept. To build the most hilarious, death defying constructions, and then abuse the laws of physics as much as possible when going through the courses. It should make for a fun and exciting experience.

Create takes place in 14 unlockable levels, each consisting of ten physics based and five creation based challenges. Worth nothing is that even if there are beautiful 3D areas you can decorate, the real action is played out in two dimensions. It's a bit of a shame. I can't help but think about what physics based challenges in 3D would have been like. Yummy.

As far as I know "create" is a verb that implies that something is actually being created. But after spending some time with Create I realise I have been misled. Perhaps it's my language skills that have deserted me, or more likely it's the title of this game that's misleading. I don't feel like I've created anything of value. A major portion of the problem solving involves adding stickers and backgrounds to pre-made levels. A more accurate title would have been "Decorate".

It should be noted that in order to complete the various brain teasing objectives you have to put together a chain of events with various objects on hand. It still doesn't feel like I'm being creative. Often the objects at your disposal give you a clear hint on how to solve the objective. Your artistic freedom is limited by strict guidelines. I would have like to have seen a wider selection of gadgets and tools to use in order to achieve the objective. I seldom have to think "outside the box", and a correct solution often requires lots of trial and error. But you won't strain your brain trying to come up with it. The problems occur when you have to fine tune your objects over and over again until your achieve your objective.

It's this frustrating fine tuning and trial and error that ultimately means that Create doesn't provide us with the fun family entertainment is sets out to. All this fine tuning makes it hard for the youngest players, while at the same time it doesn't really invite the rest of the room to join in the problem solving.

The game uses a colourful and fun palette. This easy going visual style is a great foundation for an enjoyable experience, not unlike what you find in Viva Piñata or Little Big Planet. Unfortunately Create also comes across as disappointingly flat and soulless. Part of the problem is the complete lack of characters, dialogue and voices. Only music and simple sound effects add to the atmosphere.

There are great moments to be experienced in EA Bright Lights' game. A few of the later challenges put great demands on creative solutions, and the need for tiresome fine tuning isn't as apparent. It's in these moments that the true potential of Create comes across. There is enough here to keep you occupied. More than 200 challenges provide hours of entertainment, and possibly even days to complete. The problem is that the majority of these challenge are outright boring. You will find the solution rather quickly, spend most of the time fine tuning the objects, and your brain can relax throughout the experience.

Create is a game that could have been so much better. EA wants to inspire creative thinking, but fails at delivering finesse and precise design of the challenges. I really hope they get a chance to make a sequel in the next couple of years as the developers are sure to have learned lots of lessons with Create.

Gamereactor UK
+
Lots of objectives to complete, amusing and inviting visual style, fun concept.
-
Most of the objectives are too straight forward, annoying camera angle, not that much room for creativity.
is our network score. What's yours? The network score is the average of every country's score

REVIEW. Written by Kim Kristiansen (Gamereactor Norway) on the 3rd of December 2010 at 13

EA Bright Light's Create hasn't been given that much attention. Something to take a closer look at now that Little Big Planet 2 has been delayed? 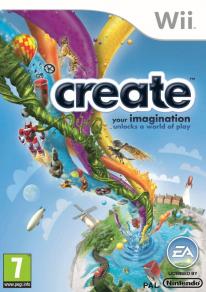