"For those who never experienced it the first time around, or maybe hadn't even been born, you won't go far wrong with this beautifully crafted yet totally wacky reboot."

You can already start with the fun by downloading the latest update on PS4, Switch and Xbox One.

Plenty of new content is on the way today, including a monstrous new racer, karts, Golden Wumpa Fruit, and more.

Spyro and pals have landed in Crash's racing game, and we tried out the new track in Time Trials.

Crash Team Racing is getting microtransactions

The new Back N. Time Grand Prix is landing later this week, but that's not what has the attention of many fans.

See Crash in the driver's seat in a figurine to accompany Beenox's recent karting remake on consoles.

We also get various other tweaks, like some offensive skins which have been changed based on community feedback.

In fact, the remastered kart racer is the third-biggest launch in the UK so far this year.

CTR: Nitro-Fueled is on today's stream

Crash Team Racing is back in action, and Sam is here to show us exactly what the new game has in store.

Reignited Trilogy is heading to PC and Nintendo Switch, and the little purple dragon is landing in CTR as post-launch DLC.

Check out the latest gameplay for the upcoming kart racer ahead of its release later this month.

See how you can make each racer your own, including decals, kart bodies, paint jobs, wheels, and more personalisation options.

Crash Team Racing Nitro-Fueled is 15 GB for Xbox One

The kart racer is speeding our way in June, and it doesn't seem you'll need to clear loads of space to get involved.

Check out the final boxart for Crash Team Racing Nitro-Fueled

Beenox and company have decided to go with a different design as Crash and his buddies prepare to get racing this summer.

We got to try the remastered racing game at PAX East, and new trailers show Coco, Crash, and Nitros Oxide in the driver's seat. 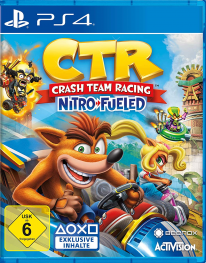