Crash Bandicoot: Nsane Trilogy stormed the charts as a PS4 exclusive last year and is ready to do it again on Nintendo Switch, PC, and Xbox One later this month, but that's not all, because the Brazilian box art reveals that there's something else coming with the new versions of the trilogy.

What we mean is a new level, or at least it would appear, as a Reddit user spotted a new bit of extra content on a couple of websites, which is the bonus level Future Tense, not yet announced by Activision.

Don't forget that Crash Bandicoot: Nsane Trilogy's re-released date was pushed forward from July 10 to June 29. Have you completed all the content in the PS4 package?

"While infuriation is a regular feeling, that's also where the Crash games have always excelled."

Activision Blizzard reiterated their belief that the classic franchises continue to be popular within their recent earnings report.

Charts: Crash is king of the Gamescom week

The reign of the Bandicoot continues.

Charts: Nobody seems to be able to push Crash off the top

Not even Mr Incredible himself.

Charts: Crash remains at number one for fifth week

It's been a Bandicoot kind of summer.

Charts: Crash wins battle of the mascots to stay at number one 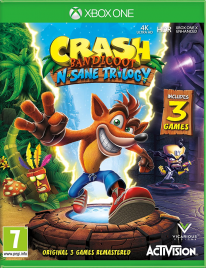