Battle Chasers: Nightwar is based on a comic by Joe Madureira and came to be with the help of a Kickstarter. We caught up with Madureira to learn more about the JRPG-inspired dungeon crawler.

The game "takes place in the Battle Chasers universe", he said, "that is a comic series I did years ago, but it's a brand new story. You don't have to have read any of the books. If you've read the comic series you're going to love seeing all the heroes again. All the main characters are playable in the game and you'll see lots of little easter eggs and some familiar faces, but if you've never read the comic it's totally fine. You'll get introduced to all the heroes and you'll know what's going on".

Talking more about gameplay, Madureira said "crafting is really important in the game and it's a lot of the reason you'll be going to dungeons and like I mentioned they are randomly generated so it gives you lots of new stuff to find and making new items. You can craft in town but actually in the dungeon you'll find the forges to make the best equipment and they're kind of dungeon-specific, so once you gather the resources for a specific item you might have to go to that dungeon and then look for the crafting station which randomly spawns".

Fans of the game should expect it towards the end of this year for PC, PS4 and Xbox One.

"Airship Syndicate's debut is a stylish RPG which is lovingly crafted for fans of the '90s comic."

We step into Airship Syndicate's world.

It's coming in October.

Battle Chasers: Nightwar is hybrid to make it more "strategic"

It merges a lot of different elements together.

Crafting will be key in Battle Chasers: Nightwar

Joe Madureira spoke to us about the upcoming game based on his comic. 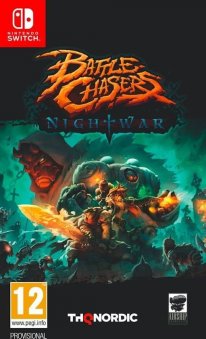