When we got to see Crackdown 3 in London recently, Senior Art Director at Microsoft Studios Dave Johnson was on hand to talk to us about all aspects of the game, and during the interview you can see below, we talked about the art style, and here's what he had to say:

"At our core we really tried to embody the 'living graphic novel'. That's what we were going after and we were heavily influenced by a lot of different artists. One of the mantras that we had very early in the game and that we stuck to pretty much from start to finish is subtlety is not our friend, and that means whether it's the colours or the animation or the over-the-top explosions, we just wanted everything about this game to be super bombastic, really colourful, and we wanted everything that a player does in the game to feel heroic and to feel special. Because at its core you're really playing as a superhero, and we wanted everything you do to feel heroic, and as a result of that we wanted all those visuals to just feed into that overall sense."

Below you can also check out some multiplayer gameplay, but for our full thoughts check out our final impressions. Do you like the visual style of Crackdown 3? 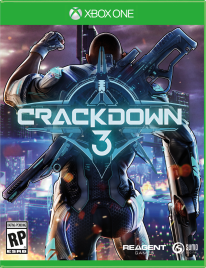