"We're simply amazed by the PASSION you wonderful people have shown our game and we couldn't be happier seeing so many fans of co-op out there ❤️", wrote the developer.

It Takes Two launched back in March and only one month after the official release the game had become a million seller. Just about two months after that, another million has been sold.

Since it's a game that needs two people to play and the game owner can share it with one friend for free, this means the number of people who have actually played the game is definitely higher.

If you don't know, It takes Two follows the story of Cody and May, two parents who are about to part their ways because life gets in the way. Their daughter is sad about the situation and wishing they can stop fighting and make up. Then, Cody and May magically are turned into two dolls and have to overcome a series of obstacles and challenges, which need the two of them work together to pass through, so that they can become human again. For more details, you can check out our review right here.

It only launched in March.

It Takes Two is now officially a million seller

The co-op driven game has only been out one month. 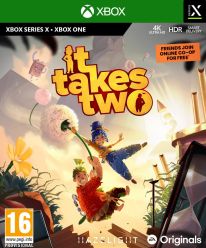