Conduit 2 is that bright but awkwardly shy child that sits wrapped up in his own limited social status at the back of the classroom. His accomplishments are many, but his clinical but astute thoughts will go unnoticed as he prefers the quiet safety of the library to the playing fields thronged on mass by his peers.

Slid proudly into Nintendo's Wii, Conduit 2 will not be recognised as one of this year's classier shooters, despite what developer High Voltage has coaxed out of the console, a FPS that's neither port nor shit, but one of the most rounded experiences the system has had. Not even with the fact that, dripping with such ample trimmings as single player and cooperative on the main campaign with local and online multiplayer, Conduit is somewhat unique for the platform.

That's because these sort of box ticks wouldn't raise am eyebrow on either Xbox 360 or PS3. Yet on the Wii, treated by some as the runt of this generation's litter, each is individually a tight and polished package. Together we're looking a minor miracle.

Funny thing is, it's not the first time the developer has done it either.

Yet while Wii FPS titles that have forcibly tested mainstream perceptions of the console are few and far between, the Conduit series has sat quietly in the corner radiating sci-fi goodness off it.

That's not to say the first game, released two years ago, wasn't without it problems. But spend five minutes talking to the developer and it'll openly talk of the problems of the original, of where creator hopes and audience response diverged.

High Voltage will happily list static screens in stead of cinematic transfers between levels and numerous other smaller details that were fault of tight development schedules.

But that was then. Two years later and we have a very polished, enjoyable slice of sci-fi action.

And the game starts with a bang, the opening level a storm-ravaged oil rig being torn asunder by a mammoth sea serpent. It's obvious set piece, but you don't really care, watching it liberally fry trigger-happy troops that'd otherwise trade you bullets for brain matter.

That it's so pretty keening its death-knell is due to High Voltage's own graphics engine, built specifically for the series. Its good to see one of the bigger stumbling blocks of the original's production gets to pay its due so spectacularly in the sequel.

Background for the uninitiated (though genre fans can make an educated guess and score at least a B+): you play Michael Ford, a agent for a shadowy organisation who is sent out to halt an alien invasion. Something you thought done in the first game, but on waking on a oil rig in the middle of the ocean, you can surmise that you've still got a bit of killing to do. Within seconds you're having to dodge bullets as troops stationed on board take offence at your presence.

You can mark a good FPS from the crowd by the AI of the enemy soldiers, and Conduit's riddled with some cock-sure special forces types. They're kind enough to let you sweat it out if you fall back to the defensive while formulating an attack, but they'll take up flanking positions once you enter their kill zone and as one charges in to spook you into doing something stupid. Which you will.

This is not a game where run and gun is advised, unless you're some physically trained lab rat with the twitch response of a Michael J Fox impersonator.

Crouch and cover is the attack strategy, with a quick button press to overturn tables and boxes your shield. Weapon sets dart between realistic modern warfare (shotguns are killers at point blank only, and are a bitch to reload) and funky science fiction offering alternative fire. We pick up one colour-coded gun that fires a horizontal line of energy on one tone setting, and a timed explosive on the other.

It's the latter that pays off in the tight corridor settings of the rig, but the full game promises a wide range of level designs to necessitate multiple stratagems and allows you to fully appreciate the range of weaponry at hand.

One device you'll always have is the All-Seeing Eye, a semi-sentient orb that can hack into security mainframes, offer objective directions and uncover hidden traps. It divvies up Conduit's action sequences with more cerebral moments.

Because there's plenty of other arsenal options as well. We get to grips with gun turrets stationed at the rig's top, that serve as a boss-combating finale against the silver-backed leviathan come the levels end. Once he's a blackened husk, we switch TVs for a quick run through on multiplayer, which reveals enough gadgets to keep you tinkering a while before you settle on your favourite load outs.

We watch two players hunt down enemies in a Horde-style mode in one TV through a multi-leveled palace before tackling our fellow journalists in a four-way frag-fest that maintains the detail of the game's single player visuals despite bagging them into four separate dividers on the screen.

A sudden thought pops into our head: how the hell did we manage to play 4-player GoldenEye on a portable TV back in the N64 era? Its quickly snatched away as we're shot through the noggin by a sharpshooting son of a bitch in an elevated position. A quick load-out change as we wait to spawn later, and we're hightailing a flanking manoeuvre on him. Only to be shotgunned in the back of the head by someone with the same idea.

It'll be interesting to see this played with eleven other players on the online modes. If you're a dedicated Wii owner desperate for some FPS action, you might be thinking the same thing. You haven't long to wait now, as Conduit 2 hits sometime this spring.

But even if you're more familiar getting these genre licks off a Xbox 360 or PS3 controller, it'd do you good to push yourself outside your comfort zone.

Conduit 2 mightn't have the HD flair of its contemporaries, but it's got plenty of quality content rattling under the hood to take on the bigger names on the market, and for that alone it does deserve your attention. And wouldn't it be nice to make some noise for a Wii shooter for once?

REVIEW. Written by Jonas Elfving (Gamereactor Sweden) on the 4th of May 2011 at 16

"This turns into a rather extended and frankly rather awesome fight, but as is often the case with albums where the first track is usually the best one"

Blowing apart people's expectations of what defines a Wii shooter, how to do a sequel right, and will the Conduit name have a '3D' tag next to it anytime soon: High Voltage talks!

PREVIEW. Written by Gillen McAllister on the 14th of February 2011 at 12

High Voltage are almost done with it

Sets the stage for the sequel 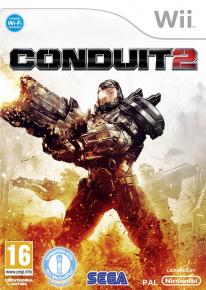