Back in the early days of gaming, we were often in for a challenge. Brutal difficulty and an unforgiving nature were a necessity to prolong what would otherwise be very short experiences. However, as the medium has progressed and the technology that powers it has been improved, the need for a steep challenge has slowly faded into the background. Instead, players were pampered as games grew vast with huge open-worlds, and offered replayability through multiplayer.

Alongside a growing legion of indie games, From Software's Demon's Souls sought to challenge this modern way of thinking about game design and revert it back to the days of insane, borderline unbeatable content. With its razor-sharp controls, a plot wrapped in mystery, and a different take on online gaming, Demon's Souls created a subgenre all by itself, shrouded in a vibe that harked back to the early days of gaming.

Which, in a roundabout kind of way, brings us to Code Vein, the latest game to embrace a similar style of gameplay, and Bandai Namco, who served as publisher for Demon's Souls in Europe as well as its successors in the Dark Souls franchise, is at it again with this vampire-themed Souls-inspired offering. However, the question remains as to whether Code Vein can stand up to some strong competition and be unique in its own right.

When we got our hands on the game at Bandai Namco's pre-TGS event held at their Tokyo headquarters, the first thing that grabbed our attention was the art style. Viewed as a merger between anime aesthetic expression and apocalyptic-esque, bordering on sci-fi, all of it is beautifully rendered, and as we were running around, we could spot a huge amount of attention has been paid to even the smallest details. Code Vein won't win awards or be remembered for being the prettiest game, but the execution is still commendable.

In the end, as with the Souls series, it all comes down to the quality and responsiveness of the controls. Unlike its inspiration, Code Vein is more grounded in using magic abilities and special skills to defeat your enemies. Without careful movement and using the right combinations, the enemy can be ruthless, destroying the player in a matter of seconds. Notably, charging certain special skills has a more devastating effect on the enemy, dramatically raising the chances for survival.

In terms of weaponry, we aren't exactly sure about the variety since we only got to try out two different swords during our hands-on. As is a tradition with certain Japanese video games, these swords were massive and a far cry from reality. The difference between the two swords was vast and the size of one sword made it almost impossible to use, rendering it more or less useless in encounters with multiple enemies.

Another central element in Code Vein is a feature referred to as the Buddy system. The buddy is an AI-companion joining you from the start through until the finish of your perilous journey. Even though the developers explained this element as key, we've rarely had such a useless companion in battle (and we've played Kingdom Hearts). We, therefore, had to ask the developers whether they had any plans for future cooperative multiplayer in the pipeline. We were, however, left without a firm answer, but here's hoping something will be implemented (the studio is certainly considering it).

In terms of story, Code Vein will follow the trend of introducing story-altering choices, with these said to have a genuine impact on the overall story. This tends to prove itself to be tricky territory, though, creating the illusion of choice rather than actual meaningful decisions, and we're eagerly waiting to see whether the team can pull off its ambitious plans.

Having had a solid hands-on session with Code Vein, we remain positive about its prospects, and this is despite a number of minor issues. The weapons are in need of balancing and the buddy system needs a lot of work before it can be considered decent, yet the beautiful world and precise Souls-esque swordplay and difficulty were joyful. Let's hope Code Vein delivers when it launches next year. 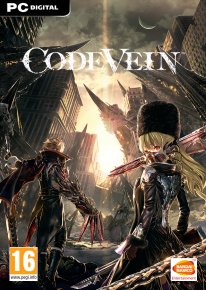