Back in 2011, From Software's Dark Souls was released, and the game quickly earned a reputation for being brutally hard. It also proved very popular. Since then many other studios have wanted to do their own Souls-like game, usually by adding some twist of their own. Bandai Namco's Code Vein keeps the basic formula intact but adds a new theme and a layer of anime art style on top. And this time you also get a real tutorial and a bunch of other useful tips and hints to get you started.

The story of Code Vein is something you don't necessarily want to spend that much time on. The end of the world has come, and everything has gone bad. The player is a revenant risen from the dead, and there are many others. You don't really need to know more than that, and it's enough to push you forward to explore this post-apocalyptic anime world either alone or with a friend.

Code Vein starts with an extensive character creation screen. There are plenty of options, and in the end, you will have your own pretty anime boy or girl. It is advisable to spend a good amount of time creating your own character because that's what you are looking at for quite some time during Code Vein. If you have regrets, you can partly make changes to your character at your main base.

The basic structure of the world has been taken from Dark Souls III. In other words, after the tutorial section, you will arrive at your main base, and from there you will teleport to other parts of the world. The game world expands as you explore and open new teleport spots known as mistles in Code Vein instead of Dark Souls classic bonfires. There is plenty of room for exploration, but don't expect a huge twisting interconnected world as the first Dark Souls had. There is even a separate bulletin board in your main base to show you where you are expected to go next in order to progress the story. Everyone who spent hours wondering around Dark Souls feeling lost will appreciate this bulletin board in Code Vein.

Gamereactor UK
+
Colourful anime visuals, lots of depth to ease the grind, useful read hint section, multiple ways to progress.
-
A handful of technical problems, story isn't that important, playing with a friend removes much of the challenge.
is our network score. What's yours? The network score is the average of every country's score 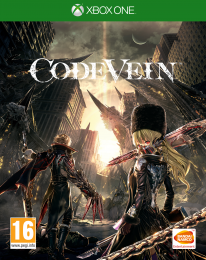