During the weekend, a closed network test was run for the upcoming action-RPG, Code Vein. By participating in the demo for a number of hours, we were able to get a taste of its brutal gameplay and multiplayer offerings. From past trailers and previous coverage, we went in fully expecting Dark Souls dressed up as an anime girl. While replicating the addictive formula in a hyper-animated fashion with exaggerated tropes, that's exactly what Bandai Namco seems to be delivering here.

Code Vein is set in a post-apocalyptic world threatened by blood-hungry demons who are known as the 'Lost'. The narrative resembles that of a typical nonsensical anime plot, as the main character is gifted with special blood which ables them to purify the toxic environment, and consumption of foreign blood grants them new abilities. It's all very vague and uninteresting compared to the action itself.

While the term 'Souls-like' is often thrown around and stamped on any game with a high enough difficult curve, Code Vein's gameplay structure is a pretty close match to the Dark Souls series. Progression requires a "haze" currency which is obtained by defeating enemies and lost upon death, whilst checkpoints are marked by crystals which offer a place to rest and level up. For all intents and purposes, the game works on that very same Souls system with little in the way of boundary-pushing.

To keep you invested, Code Vein places a heavy focus on character customisation. Player classes are known as 'blood codes', which are custom-builds of stat enhancements, passive buffs and interchangeable abilities. The fighter excels at close combat and swordplay, while casters are able to teleport and pick off foes from afar with fireball projectiles. Experimenting with the many different play styles did keep us engaged and the ability to switch classes on the spot really makes the gameplay feel fluid. There's a good balance of accessibility and depth in these combat mechanics, with the right amount of encouragement to mix up your arsenal from the standard template.

With the many similar mechanics checked off, the game truly does look and play the part of an 'anime-Souls'. The graphics are heavily stylised and mostly aesthetically-pleasing, despite some of the more ridiculous scantily-clad characters and vacant expressions during pivotal story scenes. In contrast, the soundtrack is pretty great with varying classical and rock melodies to better complement the action ahead.

After finally plodding through the small grind of a prologue, we found the real meat of Code Vein in the 'Depths'. This area is a special dungeon you can explore later in the story, made up of branching pathways with fearsome high-levelled ghouls hiding behind every other corner. This is where the challenge ramped up and we began our methodical exploration down each pathway, carefully disposing of the enemies we could before high-tailing it back to nearest rest point to level up our character's stats and unlock new abilities with the currency.

This push and prod approach to gameplay is the most engaging part of any Souls-like. With each venture into the heart of the dungeon, you get a little stronger, braver and more confident in your ability to slash down a room full of aggressive enemies, inching that tiny bit closer into new territory with each attempt. It becomes as much a challenge of memorisation as it is perfectly executing combat. Remembering which areas of the map lead to new pathways and where enemies are placed allows for pre-planning and switching up your play-style to best tackle particularly tricky foes and bosses.

Like the games which inspired it, Code Vein seems to be a brutal test of patience and reflexes. Those who can't manage either for too long are accommodated by its multiplayer SOS feature. With the ability to call in additional players online, it relieves much of the tension and frustration, making shorter work of strong enemies with a valuable arsenal of player classes beside you. However, for many genre veterans, this is the bread and butter of the gameplay and could prove a detriment to the experience. Boss fights don't have the same intoxicating feeling of intimidation when the spotlight isn't on you alone and a group victory doesn't grant the same level of satisfaction.

In the full game, it'll be interesting to see how multiplayer is balanced to ensure the right amount of challenge no matter the group size. Going solo, Code Vein appears to be a commendable stab at the Souls-like experience, really nailing the adrenaline-filled battle and fast-paced movement with a wealth of exploration. 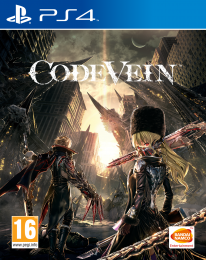