Civilization VI is getting a big community update next week

There's an update to the Red Death multiplayer mode, plus a bunch of balance tweaks.

Hot on the heels of GTAV comes the Firaxis-crafted 4X strategy game, and it's free for the next week.

The first piece of DLC is coming to the strategy next week, with the second scheduled for July.

Civilization VI coming to PS4 and Xbox One in November

The ultra-popular strategy game from Firaxis Games is making its way to PlayStation 4 and Xbox One later this year.

Another game jumps on the battle royale craze, and the Red Death involves mutants, nukes, and one important spaceship.

That's the goal of Firaxis Games and 2K, with both expansions changing the strategy game in major ways.

A new report after their Q3 financial earnings reveals that the Switch version of the game exceeded expectations for the publisher.

Suleiman the Magnificent is bringing his own unique abilities and units ahead of the expansion's release in less than a month. 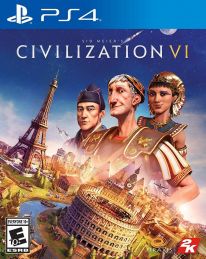