A couple of years ago I had a serious itch for a new city building simulator. Then Electronic Arts announced a new SimCity from Maxis was to be released in 2013. And boy was I excited. I did what I could to find images, movies and more information on the new game they were working on. I could not have been more hyped.

Then the release came, and it was nothing but a big disappointment. I kept telling myself that it wasn't so bad, that the game was just "different " from classics such as SimCity 2000 and SimCity 4, two of the most prominent entries in the genre. But months went by and the itch was still there. The dream of creating a metropolis of gigantic proportions was left unfulfilled. The limitations in the new SimCity made the game boring longterm. And city builders can never be boring. Coupled with a tiny building plot, intrusive always-online DRM and the way the whole region system worked the most recent SimCity simply didn't deliver.

Two years later I'm sitting in front of my computer playing Cities: Skylines, the newly released game by Finnish developer Colossal Order, a company with only two games under their belt in the form of Cities in Motion and Cities in Motion 2. And what Colossal Order has managed with Cities: Skylines is simply astonishing. They've actually managed to do with a dozen developers on staff, what EA and Maxis with their hundreds of employees couldn't. They've given us an awesome city builder worthy of being called one of the best ever made.

At first glance Cities: Skylines looks a lot like SimCity, which isn't bad a thing. One thing SimCity had going for it was the visuals and presentation. The soft tilt shift and sharp graphics really made it look great, and the same goes for Cities: Skylines. The way you start up is the same too. You connect a road to the main highway, and start out by plotting down residential zones. When that's done you place down your water pipes and sort the power situation. And just as with the city builders of old, you actually have to have place down power lines and water pipes. You even need a sewage output connected to the water pipes, and if you don't watch which way the water flows you'll have sewage coming out of everyone's faucets (not a good thing). In Cities you even have to think about the noise your buildings produce. Noone wants to live next to a noisy wind turbine, or the highway.

The first game I played didn't go very well. I executed my SimCity approach. Plop down buildings and zones down, just get it done! That wasn't that smart, because placing those power lines and pipes actually cost a tiny mint, so when I was done and felt I had a nice starting city, I remember that I had forgotten those two things. The money ran dry and my city stalled, people moved out and that was that. Lesson learned. The next city was a little bit better, but I still wasn't making any money. The problem was that I hurried along too quickly. In Cities: Skylines you need to take your time, relax and have fun. And when that mindset introduced itself, everything went much better. My cities where finally flourishing, and growing exponentially. The whole game felt like a virtual Zen-garden, and my mouse pointer the rake you drag over the sand.

Another great thing is the fact that you don't need to build everything on top of each other, you can have space and air in your city. You start out with a 2x2 sq km plot, and out of the box you will be able to buy eight more plots of the same size as you progress your game. With a modification you'll have access to all 25 plots, which brings the total size to a staggering 100 sq km. And this is where Cities: Skylines really shines. They have introduced districts that aren't just named places, but actual districts where you can set your own policies. Want a little part of your huge city that doesn't allow smoking, pet ownership and heavy traffic? You can do that. What about a industry area where only farms are allowed? Go right ahead. And it's stuff like this that really lets your imagination shift into overdrive.

The best thing about this game is that it supports Steam Workshop. Just a week in and there were over 10,000 things there to download. Everything from maps and building to objects and mods are available. Some of the mods even add much sought after gameplay changes like day/night cycles that aren't part of the base game. Some mods give you new ways to see how traffic works in your city. Why is there always congestion in that part of town? Find out. Colossal Order have also said that they will continue to support the game post launch, and they want to keep in contact with their fans by social media like Facebook and Reddit so we can expect official support as well.

As is the case with most games, there are a few things that seem less intuitive, but there is nothing that could be seen as game breaking. Besides, you can almost be guaranteed that someone has been annoyed by the same thing and actually created a mod to fix it. Some small things are the fact that you can't use the different overlay maps while wanting to build specific things in the city. For example, it would have been nice to be able to see the traffic flow in the city before plotting down even more traffic producing buildings near by. And some people will probably miss having disasters in the game. One of the things I'm most annoyed about is the UI, even though the UI is functional. It's ugly. I'm sure someone will fix this though, or hell, maybe Colossal Order will do it themselves.

All in all, Cities Skylines is the city builder every fan have been craving all these years. It's game that offers quality in every nook and cranny. Which is damn impressive from the dozen or so developers. The fact that a tiny company can do what a multi billion-dollar company couldn't is awesome, and it is not even sold for a full £40. The game is just £22.99 on Steam, and with that you get the game for Windows, Mac and Linux, and a ton of content both as part of the game and through Steam Workshop. This is basically David and Goliath all over again, and it seems history repeats itself as David wins this time too.

Advertisements
Gamereactor UK
+
Huge area to build your city, Everything SimCity did just better, Steam Workshop support, No forced online connection, Great value.
-
No disasters (unless you build a dam and cause a flood manually), Ugly user interface.
is our network score. What's yours? The network score is the average of every country's score

Online
gamedevil84 on the 24th of March 2015 at 13:15.
And no multiplayer... at all.
What made Sim City so fun was actually starting zones with friends and cooperate.

And no multiplayer... at all.
What made Sim City so fun was actually starting zones with friends and cooperate.

The idea behind it was a good one on paper. But the moment one or more of your friends didn't want to play anymore. Then you had a leech of a town or more that only made the rest of the region unplayable. Which wasn't that much fun.

Kim Visnes // Gamreactor Norge // You guys make me happy in the pants! 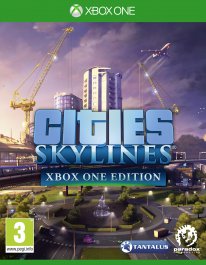