The toy automata, Chibi-Robo, started its virtual journey in a little gem of a game that went by the same name and was released on the Gamecube, Chibi-Robo!. Back then it was a fresh-faced explorative adventure through 3D household environments (perhaps inspired by Toy Story) with an eco-message (possibly inspired by Pikmin) and that came with a touch of bizarre Japanese design. This cute android has never been a top-tier star for Nintendo, but in those days it managed to conquer many a player's heart.

Now, after several experiments, original developers Skip Ltd. and Nintendo have decided to offer up a new adventure for the small robot. Chibi-Robo: Zip Lash is a game made exclusively for Nintendo 3DS, which may have guided their decision to change genre, with the studio now opting to place the little robot in a side-scrolling puzzle-platformer.

Perhaps fans of the original would have preferred a return to the series' roots, but it stands to reason that many players might enjoy a more accessible approach, especially if you take into account the usual quality of Nintendo's platformers. The concept of Zip Lash - as its name suggests it revolves around moves using a Western-style whip/lasso - is not bad. The problem is that the execution is very, very poor.

Chibi-Robo has a normal lash attack (red, X button) that he can use horizontally or diagonally upwards, then a super-lash (blue, Y button) that he can throw in any direction and that makes for very cool rebounds. This whip/lasso is actually the robot's power cable, at its end the plug socket. With it the character does everything except jumping: he holds onto platforms, activates switches, destroys enemies, collects items. The lasso/whip keeps increasing in length during each level as you collect items, and that's basically what most stages are about: further the length of your chord and thus your moves, and collect a lot of items along the way.

But, as good as that may sound, the implementation of the controls and the way you interact with the level design completely ruins the experience. The response time is too slow, it feels too clumsy. Limiting the diagonal range is understandable, but the layout of the various elements in each stage often doesn't fit with the premise. The long range attack has a cooldown so it can't be overused, but the time spent waiting for it to come back is irritating and the game sometimes chooses to ignore that you've pressed the button to charge it. In addition, the omnidirectional controls on the 3DS analog pad leave much to be desired, it's excessively sensitive and that can ruin an accurate shot when it's needed the most.

All this adds up to really slow pacing, with frustration heightened by uninspired puzzle, challenge and level design. The result is an infuriating experience at every step, one that doesn't keep up the standards we're used to, and that feels outdated. If you fail, it's often due to control response issues, not due to the difficulty of the challenge presented to the player.

And the problems don't end there. Although Chibi-Robo itself is really easy to like thanks to its visual style and some funny animations, the noticeable aliasing means jagged edges manage to ruin its appearance onscreen, and that was the one of the more salvageable issues. The vehicle sections are cumbersome and annoying, even more so than standard levels, and when you finish a level you're faced with an inexplicable wheel spin to decide the destination of the next stage. It's usually easy to find a new level to play through, but any distraction and a subsequent mistake and this method of selection can force you into repeating a stage. Nooo!

Finally, as you can see in the attached trailer, if you use the Chibi-Robo Amiibo in conjunction with this game the character becomes SuperChibi-Robo, a much more agile and nippier version of the character. Wait, what?! Isn't that something that would improve the basic game so that it's more enjoyable for everyone?

Tons of collectibles scattered across all of the levels, including real-world sweets, chocolates and snacks (mainly Japanese) are a strange exercise of product placement, but even this marketing is unable to hide the reality of what this is; it's simply not up to the standard of other Nintendo platformers. Rest assured you can find many alternatives for your 3DS, not just from Nintendo but there are also lots of third-party and indie efforts that are much better than Chibi-Robo: Zip Lash. Do as the name of the developer suggests: Skip.

Gamereactor UK
+
+ Chibi-Robo its animations are charming, A couple of nice puzzles, Lots of collectibles.
-
Frustrating controls and pacing, outdated and dull level and puzzle design, underdeveloped ideas, Amiibo functionality, not the quality and polish we've come to expect from a Nintendo platformer.
is our network score. What's yours? The network score is the average of every country's score

REVIEW. Written by David Caballero on the 4th of November 2015 at 11

"It's simply not up to the standard of other Nintendo platformers." 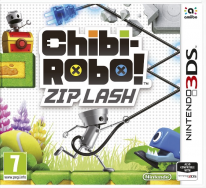