The official confirmation and reveal of Breaking Bad's Giancarlo Esposito as Far Cry 6's main star at last weekend's Ubisoft Forward sparkled discussions within the dev & gaming communities. The Danish-born actor will once again step into the shoes of a Latin mega villain, though this time he'll be playing Antón Castillo as a dictator in the island of C̶u̶b̶a̶ Yara in FC6, instead of the Chilean restauranteur in BrBa (his most celebrated character so far).

One of the voices trying to start a conversation on this casting choice was Chella Ramanan's, who works for Ubisoft Massive as a narrative designer. Over on Twitter, she asked the following question:

"Can we talk about the fact that Giancarlo Esposito is not Latinx. Great actor I enjoy watching, but why is he taking Latinx roles? This is erasure. This is not good casting. Games need to do better."

Ramanan herself has always been about diversity and inclusion. As an activist on this matter, she co-founded the representation and inclusion movement POC in Play and was awarded by Game Dev Hero as a "Diversity Champion".

The designer also is "half of" the micro-studio 3-Fold Games, which in two days is releasing Before I Forget, a short interactive story about Sunita, an Indian woman living with dementia. We learnt all about the game with Chella herself during this Gamelab interview, but it's worth noting that the game's voices will be played by Anjali Kunapaneni and Bushra Laskar.

The Twitter thread is full of arguments and different points of view regarding the topic, but Chella shared what she wanted to see in video games in that Gamereactor interview:

"I want to see cyberpunk settings that actually embrace what a cyberpunk world would be, the transhumanism of that, and so the sort of gender and sexuality that world would actually look like that they don't often do, still comes through a very male-centric lens".

Other than Esposito, Far Cry 6 seems full of Latin talent (with Coco's Anthony Gonzalez as Diego, together with Jason Canela, Alex Fernandez, or Shakira Barrera), as shown by the credits trailer below. What do you think about Esposito again as a Latin villain?

Rumour: Far Cry 7 is going to be "radically different"

Rumours about the seventh installment have surfaced ahead of Far Cry 6's release. 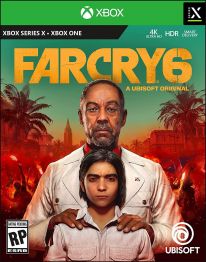