They say there's a fine line between genius and madness, and this is especially true of Atlus' Catherine. This rather unique title was first released in 2012, and while the Full Body edition gears up to give us a full-blown remake of the adventure, Catherine Classic has just dropped on PC to keep us... satisfied until that arrives. If you have yet to play it, this is the perfect time to try it out, and that's exactly what we've been doing, to see how well this port works seven years after it first launched.

The first thing to note is that this is pretty much a straight PC port, with the added extras as expected for PC users. That means unlocked frame-rate, 4K output, and customisable keyboard controls, and the only added content is Japanese voiceover available for the first time in the West. We won't be seeing extra stuff until the Full Body edition, but this is still good news for PC fans who always want the crème de la crème.

The premise of the game sounds simple enough - you're a man called Vincent trapped between the love of his long-term girlfriend Katherine and a new lustful fling with a girl called... Catherine. Vincent is a bit of a commitment-phobe though, and he starts to have these dreams where not-so-subtle metaphors claw after him as he climbs tower after tower to escape from them. Oh, and he doesn't ever remember meeting up with Catherine, so he unintentionally digs himself deeper and deeper into this double life of his.

The bulk of the game that you have agency over revolves around these towers, as it's a puzzle game in disguise. You need to move blocks around to climb each tower, which sounds simple at first, but soon you'll be mixing with a number of traps, bombs, ice, and more to make your ascents more taxing. It's definitely not an easy game when it comes to the puzzles, but extra items can be bought and found to give advantages like an extra block or killing all enemies. You're not alone on your journey after all - there are plenty of sheep and other creatures looking to make the climb too.

Yes, you read that right, there are sheep aplenty in this game, because within the dreams that Vincent has are other people, manifesting themselves as sheep. They're in a similar life situation to Vincent, and between every level in the dream world, you can talk to these people to hear their stories and, perhaps more importantly, hear about techniques on how to climb, which you may well need when it comes to the later stages.

The game is very structured for the most part, alternating between hands-off narrative and bar scenes, which then lead into sleep and consequently dreams. In these bar scenes you hang out with your friends to bellyache about your predicament(s), and you can either scurry off alone to your bed to hurry the game along, or talk to people, drink, save the game (which can only be done on the phone in the bar or between levels in the dream world), and check/respond to messages on your phone.

There aren't a bucketload of choices in this game like there are with titles such as Life is Strange, but the few that you have are very deliberate, swinging a meter back and forth, the meaning of which is hidden from you at first. This includes responding to text messages and conversation prompts, but then there are the confessionals in the dream world, asking big relationship questions like what you'd do if a guy hit on your girlfriend - step in, or trust your partner? These have a bearing on the many endings of the game, so make choices wisely...

The cast of characters is varied and colourful, but of course, the stars of the show are the love triangle, with Troy Baker putting in an excellent performance as Vincent, capturing how pathetic and confused he is throughout the whole ordeal. He pretty much epitomises the typical male scared of commitment and running away from his problems, and it's actually a very funny game as you see him fumbling his way through the situations placed in front of him.

The reason it balances genius and madness so well is because underneath insanity like talking sheep, giant hellish towers, and the buffoonery Vincent constantly gives us, there's a deeper meaning behind everything. Dream meanings, philosophy, relationships, and even hell itself is a talking point for Catherine, and it's a game that leaves a lot of food for thought after you've finished the weird and wonderful journey we're served up. It's intelligent, but at the same time thoroughly stupid, and that's a very hard thing to achieve.

What's more is that once you've finished the story there are also two other modes to try out as well, including Babel - which lets you replay the towers for a higher score - or Colosseum, where you can battle against others in a climbing war. There are also multiple endings to try out for, from the ridiculous to the romantic.

Stylistically speaking, we were reminded very much of Persona when we were experiencing Vincent's journey, and that's because it was developed by the same team, which is evident in the characters and even the UI, like the splashes of colour that show up as a prompt to talk to people. The 3D style itself is great, but the anime cutscenes are even better, and creates this immersive experience similar to Persona, except not as expansive.

We walked away from Catherine puzzled, in more ways than one. What we'd just seen was bewildering, but we knew we enjoyed getting surprised by Atlus during this mature adventure. It strikes a fine line between craziness and intrigue, and the resulting product is unique enough to justify recommending it to those who want a solid story and some tough puzzles. It's not exactly Persona in scope, but it's just as engaging, which is high praise indeed.

Advertisements
Gamereactor UK
+
Deeper themes like relationships, Tons of personality and humour, Nothing else exists like this, Puzzles are complex, Visually striking.
-
Difficulty spike is hard to handle, Heavy-handed stereotypes at times.
is our network score. What's yours? The network score is the average of every country's score

REVIEW. Written by Gillen McAllister on the 10th of February 2012 at 17

Catherine Classic is out on Steam right now

Atlus' bizarre and unique game releases on PC to keep us entertained before the Full Body edition comes along.

A remake, entitled Catherine: Full Body, is headed for the PS4.

Is Catherine on its way to PS4 and Xbox One?

A rumour suggests an announcement could be coming in the next few weeks.

Atlus hints at a Catherine sequel

It looks like the romantic puzzle adventure may return. 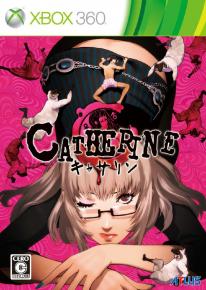