The genius of Castlevania resides in a relatively straightforward routine of persistent progression: levelling up, making bigger numbers pop out of enemies' heads when you smack them, and grinding for rare item drops. There's a tiny but crucial sense of achievement with every monster killed, every bat whipped and every boss defeated - and that's precisely what's missing from Castlevania: Harmony of Despair, a multiplayer adaptation of the series for XBLA that scraps several of the platformer's tenets in the name of introducing six-way co-op.

On the surface, Castlevania HD bears a striking resemblance to previous titles in the series, to the extent that visually there's very little originality here to speak of. The HD acronym speaks not to any increase in the resolution of the sprites - in fact, most of the art remains identical - but to a camera mode that displays the entire level at once, as well as an "actual size" mode that invites you to sit really close to your TV to see what's going on. One is impractical, and one is medically inadvisable, but both are an undeniably novel means of viewing the game world, especially when multiple players are flitting about the place. It's essentially like playing an interactive Prima Guide while somebody stands behind you with a stopwatch, shouting at you to hurry up.

The levels are typical Castlevania fare. You've got thirty minutes to find and defeat the chapter's boss by traversing the heavily compartmentalised, room-based castles, thwacking preset enemies and triggering switches, traps and chests. The new wide-angle world-view allows for some level-spanning threats. The demonic Gergoth boss from chapter one, for example, can fire his white-hot mouth-beams across the entire map, while the Puppet Master, another returning boss character, tends to crawl about the castle in search of iron maidens in which to trap you. Using the full-view camera in this instance allows you to pre-empt his movements and make your way to the appropriate part of the level.

Chapters also sport various switches and levers intended for use by multiple players, allowing fast access across the map or rewarding you with previously inaccessible treasure chests. At worst these feel like cursory inclusions, but at times they open up genuinely useful alternate paths, allowing dawdling players to catch up, or advancing players to clear out rooms of enemies before the rest of the team show up.

But perhaps the strangest design choice is simply in how you progress through Castlevania HD's chapters - or more accurately, how you don't. Play alone and you're all but certain to fail repeatedly and be unceremoniously chucked back to the start of the level. As improving your character is achieved solely through finding or purchasing better weapons, armour and spells, an absurd situation is created in which you're effectively forced to battle bosses long before your character is ready. Only by replaying the 10-15 minute long chapters can you improve your character, and with chapters playing out identically every time (apart from the random loot you'll be picking up) this leads to Groundhog Day levels of tedium and frustration. Castlevania HD is punishingly difficult for the lone player.

Get five players in with you though and the game becomes a far more well-rounded, as well as hectic, affair. Opened chests award all players with items, the different playable characters see players carving different routes through the castle, dead players can continue the game as bone-chucking skeletons, and the chapter bosses suddenly seem less intimidating. But with the neutered, item-based character progression, the entire charade feels like a pointless exercise in repetition, and the inclusion of a "save replay" option suggests that this game is more about speed-runs and po-faced efficiency than good honest fun.

Castlevania HD was built to be played in co-op, so much so in fact that it feels like a multiplayer sideshow to a non-existent single-player mode, one that doesn't work if you play alone and actively scolds you for even trying. Online, it doesn't resemble the sort of game Castlevania fans would want to play, and the frantic nature of six-way co-op simply throws all of the series' slightly clunky but previously forgiveable mechanics into sharp relief. Had this game been tied to a single-player Castlevania title, it'd be praised for it's refreshingly action-focused and investment-deflecting outlook. As a stand-alone co-op game, Castlevania HD, sadly, feels shallow and diluted.

Gamereactor UK
+
Great character design, nice art, wonderful soundtrack, loads of content
-
Character progression is tedious, borderline unplayable by yourself, not strictly the high-def Castlevania we were hoping for...
is our network score. What's yours? The network score is the average of every country's score

The long-running castle-crashing series goes co-op on XBLA, introducing six-way multiplayer antics, but does it lose some of its charm in the transition?

Castlevania: Harmony of Despair playable on Xbox One

Larry 'Major Nelson' Hryb has announced that one of the lesser known Castlevania games - and also the last 2D game in the series that Konami released before they decided...

Filled with harmony and despair 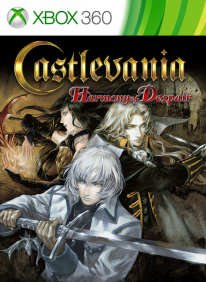