The days of getting routinely awful movie tie-in video games are starting to ease off, it would seem. The tipping point came when companies realised that they could make as much from the games as they could from the films, and that's when they started to take them more seriously. At least, that's the impression we got from playing Cars 3: Driven to Win, a game that's surprisingly solid all things considered.

It won't win a single prize for innovation or originality, but if you're after an easy and largely accessible arcade racer, you could actually do a lot worse than to check out Avalanche Software's new Pixar-themed tie-in. The film, which we've also had the pleasure of watching, syncs up nicely with what is actually a surprisingly varied game that comes with plenty to unlock, and lots of nods to the Cars series.

The tracks and all the cars are either pulled directly from or are heavily inspired by the new movie, and there's plenty of vehicles and tracks to unlock across a range of events. The cars themselves are all pretty similar in terms of handling, but you can customise them a little via different sounding horns, coloured flames when hitting turbo, and so on.

Races take place over a selection of main game types. There's a fairly standard race mode, plus stunt-filled events, battle races and a takedown mode full of bots, and you can always try and set a fastest lap if you prefer to lose the distraction of racing against AI-controlled opponents. Throw in master events, an open-world area filled with events and ramps for pulling tricks, and four-car multiplayer of the local variety, and you've got a well-stocked selection of things to be getting on with.

It doesn't matter how many events you've got to choose from if the racing isn't up to scratch, but Cars 3 offers a perfectly acceptable behind-the-wheel experience. Drifting felt a little too angular, and the competing racers feel overly clustered at times, but other than that the racing was very accessible, making it ideal for younger players. By racing on two wheels, driving backwards, drifting around corners, or hitting barrels on the track, you charge your turbo which can be then spent on pushing you to the front of the pack. You'll want to boost a lot, which means you'll also be pulling tricks all the time, which can lead to some strange looking races with some cars facing the wrong way, some on two wheels, while others shunt each other out of the way.

One of our favourite parts of the game was the weapons, and there's a handful of ways that you can wreck an opponent's good progress. A rocket up the tailpipe will usually do the trick, but you can also fire what can only be described as mortars, or tear through the opposition with a spray of bullets (concerned parents, there's no twisted metal or oil spray to worry about). It won't surprise anyone to hear that this aspect isn't as well executed as it is in say Mario Kart 8 Deluxe, but it does enough right to justify its inclusion, even if it is a little strange seeing the usually personable Lightning McQueen firing rockets into crowded groups of racers.

The tracks themselves are great, with multiple routes through, ramps, shortcuts, hidden secrets, and loads of details pulled from the movie. Fans will get a kick out of racing around the same tracks as the characters from the film, and there's a decent selection to compete on (including some drawn from previous games in the Cars series). Everything looks pretty decent too, and while we're still a way off Pixar-quality graphics in-game, they've done a solid job of bringing the characters to life.

While there are individual races and master events that take the form of boss battles (which are quite challenging when you consider the target audience for a game like this), it's the cups that offer the sternest challenge (especially if you don't play them on easy). You'll race in these bite-sized competitions and accrue points as you win events. Initially there looks like there'll be more to this mode than there actually is, and ultimately the cups are actually pretty unremarkable.

Unremarkable is actually a word you'd have to level against the racing in general. Solid at is, rubberbanding and an overly balanced feel to the action, especially when played on a difficulty setting suitable for kids, leave Cars 3: Driven to Win feeling like the safety wheels have been left on. The only thing we ever really struggled with was the stunt driving, and it turns out that we're definitely not the world's best backwards driver. Otherwise, you have to crank up the difficulty to get a challenge fit for an adult, but this in turn further highlights the game's flaws (with that in mind, we've scored this as a game for kids, not pro racers).

It's a shame, then, that Avalanche wasn't a touch more adventurous, and we think a little risk would have been rewarded with a more challenging and compelling overall racing experience. There's plenty to see and do, and younger players will enjoy the number of events, tracks, and unlockable cars on offer (perhaps they could have gone further, though). Fans of the series will no doubt find enjoyment in the company of Lightning and friends, although we were left feeling disappointed that they didn't push the boat out a little further and make Cars 3: Driven to Win the definitive video game accompaniment, not just of the this one movie, but of the whole Cars franchise.

An early version of this review was published in error, and it has since been updated.

Gamereactor UK
+
Decent selection of modes and tracks, some fun family-friendly racing, open area for tricks, battle mode is fun.
-
Little in the way of appeal for older racing fans due to the theme, rubberbanding, and what feels like an overly sanitised challenge.
is our network score. What's yours? The network score is the average of every country's score

Racing onto all consoles this June.

Shut down by Disney, bought by Warner Bros, then hired by Disney to make a game...

Offline
GR®
Mike Holmes on the 31st of July 2017 at 20:48.
It was definitely a pleasant surprise. My kids enjoyed helping me review it too. 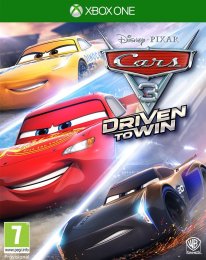