The template for a cars-based movie shouldn't be rocket science anyway. Characters who roll on four wheels, tracks based on scenes swiped from the big screen and you're pretty much done. It may be dull as dishwater but then at least its emulating its cinematic counterpart better than a multitude of button-bashing quick creations.

Thing is, someone didn't pass that formula to Avalanche Software (no relation to the Just Cause studio), and instead, the cads went and actually made something fun to play. Even though the studio's pulled off the trick before with the excellent Toy Story 3 tie-in, this is still a surprise. Its been a long time since we forgo sleep to have one more bash around the track, and to see which new mode or stage was unlocked next. And never would we thought we'd be saying that about a movie tie-in.

Cars 2 is build on the progression system that marks many games these days; earn Spy Points (the movie's centred around a Bond-typical plot, which informs both the MI5 style menus and one of the game's main mechanics) which opens new rides in the garage, as well as accelerating your progression through the stage-based story, each with a wide crop of modes and races to partake.

There's the usual races, but then we have a multitude of modes hooked around the weapon system, a setup that's pure Mario Kart, but in context of the Cars world, and is a natural inclusion given their heavy emphasis in the movie. And for a second there's a little bit of shock of the massacre that comes from missile launchers and machine guns on the track- while utter car destruction is contained and excused by those particular modes within a computer program training simulation, it's still odd seeing exploding cars in a Pixar title. Like Woody drawing a gun and capping Mr.Potato Head.

But the tricked-out controls and weapons are where most of the enjoyment is generated from in Cars 2. At first glance, the tracks are too generous in both width and length, and while the tutorial is nicely divided up between actual races, a conscious decision to keep boredom to a minimum, the first few have you believing there's little challenge to be had; drifting is reserved to a simple stick plus button hold to initiate, and even then car control is never an issue.

But then things get interesting as the complete control scheme for Cars 2 is opened. A jump mechanic which lets you leap over walls and through buildings for shortcuts, as well as avoiding incoming attacks and gaining you air on jumps. A series of tricks all started with a tap of the right stick; to either side for a side-slam, which knocks opponents away and doubles as a quick tactic to avoid track debris and blocks. Tap forward to go onto two wheels, again doubling for missile misses and to cut through tight corridors. Everything adds to increasing your turbo bar, gaining you increasing seconds' worth of speed advantage over the field.

Then there's the right-stick tap back, which swings your car around and lets you drive in reverse. If it was simple cocky showmanship it'd be a laugh. But when combined with front-facing weapons and a tap of the bumper button to reverse the camera, then you've the entertaining option of shooting oncoming racers while simultaneously slinging yourself backwards around the track. Its just complex enough to make you feel a multitasking genius when you pull it off.

With these options now at your command, you realise the reason for the tracks' wide size, as the entire packed raceway becomes rammed with shunts, jumps, dodges and attacks. The courses themselves are brilliantly designed - while you may linger too long in and around the oil rig to begin, it means you appreciate the colourful diversity when you hit the Tokyo and London tracks.

Each has enough shortcuts to deem loosing a few races just to explore worthwhile, such as nipping through Buckingham Palace's front gardens or up a partially constructed raceway on Japan's motorways. But there's also surprisingly epic moments throughout - take a race through an airport, which a tight right-hander punching you out a dark hanger and straight into the path of a landing jumbo jet, forcing you to dodge between the wheels, or a construction yard as storage containers are dropped randomly onto the track only yards in front of you.

The courses also see other types of modes than standard races - there's weapons-on variants, and from that time attack chase sequences that have you destroying enemies to rack up more time on the clock countdown, and a Hunter mode, an open arena that has you fighting against multiple waves of enemies that's surprisingly more involving than you'd think.

That all these draw upon established play styles and track set-pieces seen in recent races of Blur and Split/Second is no bad thing, and in fact Cars 2 feels more of a child of the two than any distant comparisons to Mario Kart, although there is a multiplayer option if needed.

There's little to complain about with the game, and we find only the sense of speed lacking to be the major problem, and awareness that disappears once you get locked into a surprisingly hard battle for pole position. Perhaps the developer could have dropped down a few gears when dolling out the number of times we hear the one-liners cracked by our character during a race, but it's barely reaches aggravating, and this more skewed towards the younger end of the market.

There's little pretension here; Cars 2 is a fun title whose progression system and modes mean there's plenty to dig into, a surprise for anyone who were expecting a wafer-thin collection of tracks and little else. There's a Free Play mode for those than want to concentrate on favourite modes, and the game's multiplayer and gameplay has been tailored so its perfect entertainment for gamers who want a good, family-friendly game to play their kids at. The title embodies that Pixar spirit; its a game that can be enjoyed by everyone, regardless of age. Leave your cynicism at the garage door, and come enjoy.

Gamereactor UK
+
A good range of modes, all of which are enjoyable. Great tracks full of shortcuts and setpieces. Plenty to unlock.
-
Lack of speed in racing, having to back out to menu to select a new car.
is our network score. What's yours? The network score is the average of every country's score

"It's still odd seeing such extravagant violence in a Pixar title. Like Woody drawing a gun and capping Mr.Potato Head."

Expanding the Pixar film into a game. 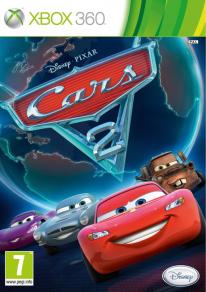