Apologies for speaking on behalf of basically everyone here, but I'm sure that we've all killed our fair share of alien beasties over the years. In fact, for some of us, it's practically a part-time job, with a really nice selection of shooters out there where you get to spend countless hours blasting away at ET until he goes wherever it is he calls home. Carrion is not that game, however, it's actually the opposite. It's a new title by Phobia Game Studio that lets you be the monster, a reverse-horror if you will, and it wants you to drag fear and destruction along with you as you slide through tight corridors and munch on the flesh of the pesky human scientists that once held you captive.

Carrion draws inspiration from all over the horror genre, but one influence that bursts out of the screen like a Xeno from a supporting character's chest is John Carpenter's The Thing (if you've not seen that movie before, treat yourself, you've been working hard and you deserve it). Here you play as a deformed amorphous meat... thing with teeth all over it and fleshy tentacles that grab and swipe and drag you along the floor. It's gross and I love it.

That last bit describes what you're playing as, but it doesn't tell you much about the game itself, so please allow me to remedy that now and set the scene. Carrion is, at its core, a Metroidvania. That means that over the course of its campaign, you unlock new abilities that allow you to reach previously inaccessible locations and deal with increasingly challenging enemies. It's a genre that makes the most of its environments, but for the player, that means a fair amount of backtracking as you crisscross your own path through a labyrinthine arrangement of levels. That's not necessarily a bad thing, and in recent years we've been given some truly delightful genre examples, with Axiom Verge and Shadow Complex being two of my favourites. You can add Carrion to that list, too.

It's not all teeth and blood splatter, so let's deal with the negatives first. My chief complaint is that some of the environments are a bit forgettable, and that can make navigation through them a bit of a chore sometimes. There is a nice sense of reactivity to the locations you visit and it feels like you're passing through these places, with broken lightbulbs swinging in your wake as blood and other debris splatters the walls and litters the floor. I still got lost a bit, though. That's a minor gripe and generally speaking my escape from the humans went down without too many problems. It's a bit vague at times, certainly, but it's nothing that a bit of backtracking and some careful thought can't fix.

The abilities that you unlock are the key to your progress, and there's actually quite a lot to get your head around, and sometimes that can mean the controls feel a bit fiddly. Over time you can add new tricks to your repertoire, such as slinging a web-like projectile that can pull levers, or the ability to turn yourself invisible if you've charged yourself up. Speaking of which, the environments in Carrion reveal the challenges ahead, and it didn't take long for me to start seeing clues as I explored. If there's a generator there, somewhere nearby you'll have to go invisible so you can progress. If there's a pool of water, at some point you'll have to deposit part of your biomass there so you can access some of the abilities that are only available when you're not at full strength. There are some puzzling moments, rooms where the way forward seems obscured, but they're few and far between and by far the biggest challenge you'll face is navigation.

Smart, layered game design is complemented by some truly disgusting visuals, and I felt utterly wicked for enjoying my rampage through the twisting and sometimes incomprehensible environments. There are some lovely pixel art designs waiting to be discovered; I already mentioned the pleasingly reactive environments, but the animations are also pretty good. The humans are a little on the stiff side, but your thing rolls and grabs and splatters its way around the place with a satisfying fluidity, which is all the more impressive when you consider the speed at which the game plays out at times, especially when you're in a frantic battle with several enemies and there are limbs, bullets, and debris flying this way and that.

When that happens, most of the humans you encounter don't offer much resistance and are quickly consumed, but once the flamethrowers and the energy shields come into play, things get decidedly more tricky. Carrion isn't a particularly expansive game, but it does offer challenging moments. When it works and all the elements click together, when you execute your actions to perfection, sliding around the levels with a gruesome elegance, pulling your prey apart before chowing on them like a cheeseburger, well, it's as satisfying as it is macabre. As you can probably tell, I've enjoyed this bloody mess of a game, and if you've got a passing interest in Metroidvanias and you've got the stomach for it, I suggest you check it out.

Advertisements
Gamereactor UK
+
Great execution of a gruesome concept, looks good with excellent pixel art, smooth performance.
-
Environments feel contrived and sometimes forgettable, a bit fiddly at times.
is our network score. What's yours? The network score is the average of every country's score

"Smart, layered game design is complemented by some truly disgusting visuals, and I felt utterly wicked for enjoying my rampage through this world."

We're taking on the role of Carrion's monster on today's stream

Carrion is set to release next week

In the latest video, Phobia Game Studio is sending enemy soldiers to their doom via remote control.

Carrion coming to Xbox One alongside PC in 2020

The Xbox One announcement trailer comes ahead of X019 in London, where it'll be playable. 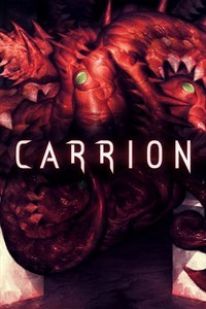